Working Out Some Thoughts on Narrative Artwear

You know how you sorta fall into an internet hole and suddenly everything starts to coalesce around a certain theme or idea?  It's almost a dream-like phenomenon, as bits and pieces of unrelated material start to correlate to each other.  You start making connections between ideas that were obviously not intended to relate to each other, but parts of things seem to start applying to other parts.  I find TED talks are like that--easy to extrapolate big ideas and apply them to specifics in your own life or your own endeavors. 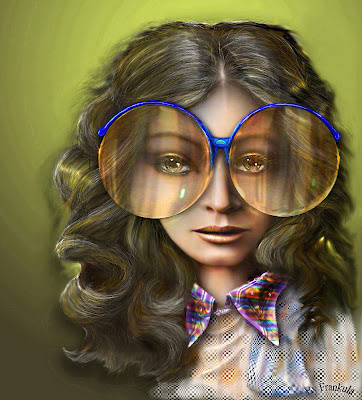 This has been happening to me recently.  I was watching some old Patrick Rothfuss interviews on YouTube because I really like his writing and I'm sort of a geek when it comes to his novels.  I was in "geek-out" mode.  The interviews all contained great ideas about the nature of writing and storytelling and education and art.  In particular, I found Trey's Variety Hour Episode #22 to be a really engaging discussion regarding all of these ideas.  And I am compelled to draw some conclusions and share them with all of you because they struck me deeply and I think you might find them interesting.

First off, feel free to watch the vidcast, but it's sorta long (an hour and 45 minutes) so don't feel pressured.

It's no secret that I've been struggling trying to find a way to incorporate the concept of storytelling into my art.  I've really been searching for a way to create a method of expressing a story through clothing.  My problem has been that clothing is rather static--it doesn't allow you much room for narrative.  I think the art that I find the most fascinating is the kind that you can keep looking at and it gets deeper and more revealing the more you explore it.  On one level, a great piece of art is a snapshot of the human condition, but I think great art draws you in beyond that snapshot and shares a whole other level that elevates it beyond a simple sliver or flash of a state of being.

When it comes to clothing, I think fashion and style may be very much like creating a snapshot that shares a surface level of your personality with others.  A person puts on attire that creates a "character" and outside demonstration of who that person is on the inside, or how that person would like to present themselves to others.  All clothing is practical to one's self and "statement-making" at the same time to others who look at you.

So I've been trying to explore this side of things, and make garments that create story and character in and of themselves.  I wrote a previous blog post about my explorations here.  As a costume designer, it's a step beyond making garments for characters in a play because there is no text or directorial vision to facilitate.  I perceive it to be a concentrated way of creating a personality statement.  I just haven't found a way to be able to make this idea into reality in a way that encompasses everything that I'm striving for.

I am toying with the idea of making some garments that encapsulate the state of a "character" in a story or situational context that everyone can recognize on one level but with deeper introspection and observation becomes deeper than it appears.  For example, I have in my head the idea of a tattered robe passed down from generation to generation, each wearer adding and enhancing his or her own elements and aspects to the robe resulting in a robe that means more than the sum of its parts.  What happens when I add the tools of designing costumes to that robe?  What happens when I go beyond the context of simply indicating the robe's time period, and add on indicating where their global location/space/climate is to that robe?  Or their social rank?  Or the age of the wearer?  Their gender?

What happens when I enhance that robe with indications of what the wearer's situational context is about?  The story of where that robe has been?  What happened to the wearer when they wore it?

I am fascinated with the concept of telling a story through a piece of clothing.  Of layering on different levels of characterization and making it a piece of artwork, rather than a simple garment.  I am really interested in helping a viewer experience a piece of story with attire like they do with a painting or a photograph--there's an emotional state that a person can experience, an emotional connection.  I am beginning to realize that I want to create a kind of sculpture that uses garments but bridges the static and non-moving state of so much sculpture and requires a person to be wearing them in order for them to be complete and whole.

There is a certain aspect of Cosplay that is very appealing to me in the sense that a person wears a garment that has a story associated with it, or draws allusions to cultural references.  This goes a bit further in the Steampunk community where people create their own attire to fit the character/personality that  they invent in their heads to portray at conventions.  The choices that these people make to share aspects of their assumed "personality" are very interesting to me.  Each aspect of their attire is chosen for a specific reason, sharing with others the nature of their character within a specific Steampunk context. 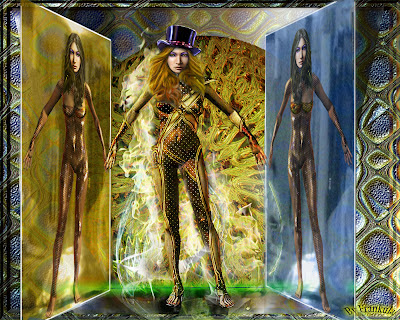 Is it possible to do that for other kinds of characters?  Is it possible, I wonder, to create a garment that shares a specific emotional state and narrative?  Can you create a garment that instills a narrative in a viewers head that says, "Tragic King who sacrificed everything in an epic battle between good and evil, and this is how he died?"  Or "Circus faerie who has lingered in a big top for generations and is dyeing as audiences have dwindled?"  Or "Family heirloom baptism robe that embues the child with special spiritual protection?"  And reveals these aspects as you look at the garment bit by bit...  "Oh, look, there's that piece--is that how he died? Did he value that?"  It's almost like narrative archeology assemblage...

As an aside, I was fascinated by Anne Rice's The Witching Hour and it's generational aspects and all the different characters in the family.  Wouldn't it be fascinating to create pieces that indicate all those different family members and their histories and personalities?  Perhaps that's why I'm interested in fairy tale characters--they are so well known by all of us, and somewhat stereotypical and similar and related, but each with distinct situational traits if you read into how to make them different...

This is just a bunch of rambling as I'm sharing this aspect of my creative process...  I haven't fully wrapped my head around what I'm saying, or what I'm exploring...  But it's a way of exploring, isn't it?  Isn't this what artists do?  Hm.

If you all have any resources or books or vids that you've found that might be related to this discussion or that you feel might be helpful, I'd greatly appreciate it.  I'm very excited about the potential pathway this might lead me down.  I feel like I'm on to something that I could really get excited about, and help thrust my work in a direction that could use my education and life experience as a costume designer in a very different way.  Thoughts?