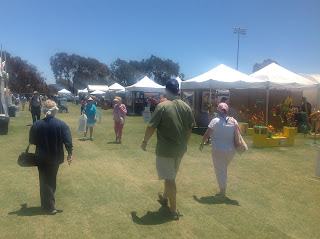 I participated in my first large-scale street fair three weeks ago, the Ocean Beach Chili Cook-Off.  It drew 70,000 into the Ocean Beach area and featured several blocks of a variety of different booths from vendors and artists.  Several music stages were dotted throughout the event, as well as carnival rides and ponies.  It was a big, BIG one day event.

I set up my booth for the first time and sold a few items but not nearly as many as I had hoped.  But it was a very good experience for lots of other reasons--I learned a lot!!

The following day, I got to go to the La Jolla Festival of the Arts.  This was a completely different event in a very different venue--on the football field at the University of California, San Diego.  It wasn't free either, as tickets to get in were $14.  I had two complimentary tickets I got through my workplace, and I'm really glad I went.

I think I can say with some surety that the La Jolla Festival of the Arts was the first time I have ever been to a true art festival, rather than a street fair.  I noticed several differences right away, and was struck by how significantly the character of the event was completely contrasting.  (Please forgive the nature of the photos--I didn't realize my iPad lens had sunblock smeared on it...) 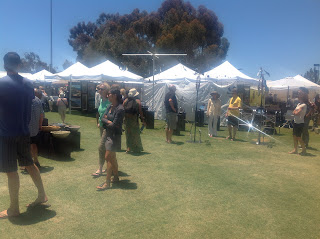 First off, because it was a ticketed event, the nature of the attendees was quite different.  Since it was not free (and most young people don't choose to spend their money on events of this nature) the people tended to be a bit older.  Consequently, the behavior at the event was much more subdued and less frenetic.  The attendees were truly interested in looking at the artwork, and there wasn't anything else to compete for their attention--no ponies here!  The event was strictly a venue for artists with a grandstand stage thrown in, notably on one side of the venue away from the art booths, so unless you were interested in perusing art you probably wouldn't bother to buy a ticket.

The event was carefully laid out in clean and organized rows with lots of space and in such a way that every artist had a corner booth with two open walls.  This was important, as there were a lot of artists with large scale sculptures that wouldn't have fit into a small 10x10 three-walled booth.  And speaking of tents, there were a lot of Trimline and CraftHut tents instead of the EZup tents that were predominant at the previous day's street fair.  EZup tents are very quickly assembled but they're very lightweight.  In contrast, the more sturdy Trimline and CraftHut brands take much more time to put together but provide a stable and relatively waterproof tent. 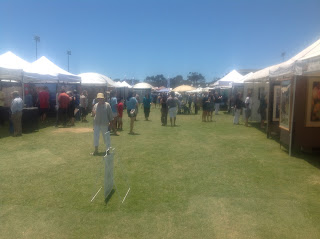 The art itself was different, too.  These were professional gallery artists, not hobbyists.  They had years of experience selling and showing their work in different art galleries across the country.  Some had done public art works in large venues--one in particular had a sculpture he had done for UCSD less than a block away from the entrance to the festival!  They displayed their award ribbons from past events proudly, and their presentation was clean and very well composed.  Many of the tents seamed to be "mini-galleries", and I can only imagine how much money went into display equipment.

In the middle of the event was a bar--not a beer garden, but a real bar, with barstools and a wooden counter top.  Around the bar were umbrellas where sidewalk chalk artists and pastel painters were creating art on boards on the ground to be auctioned off later.  A very small stage was set up where an acoustic guitar player was strumming softly, which added a tranquility to the atmosphere.

At the entrance was a silent auction and a brass quintet, as well as a booth to purchase festival swag and sign up for a free drawing.

We didn't even make it over to the grandstand, but there was a "Restaurant Row" of tents near it which featured area restaurants--no gyro or chicken kabob food vendors in sight!  A small row of festival sponsors was also featured, but separated from the art booths. 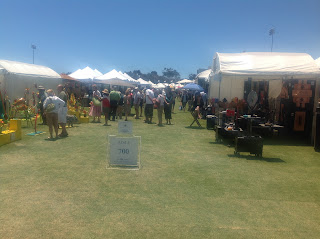 Everything was on the flat, grassy surface of the UCSD football field, so there was no concrete and the walking was smooth and comfortable.  There was a bright sun in the cloudless sky, and a soft gentle breeze keeping the temperature in the mid-70s.  It was a beautiful day, and the art made it moreso.

Everywhere it was a feast for the eyes.  I hope the artists made a lot of money that day.  Unfortunately for me, the items were pretty pricey--rarely was any art listed for anything under $300, and it was common to see items running in the $1500-$2000 range.  But it was such an elite event, I would be surprised if there weren't attendees who could afford those prices...  After all, it's La Jolla.  Most of the kind of folk that live there are pretty affluent.  Mit Romney has one of his houses in La Jolla, after all...

The one thing I was disappointed in was the lack of wearable art artists...  There was only one that was actually selling attire, and the rest were selling hats and jewelry.  I am not sure if the event simply didn't want clothing vendors, or whether they are not considered fiber art, or whether they classify jewelry separately, or what...  But if there was one thing that I took away from the event it's that maybe organizers felt clothing might not be considered "artistic" enough to warrant placement within such company as photographers, sculptors, and painters...  Maybe that's the wrong conclusion, but it just seemed odd to me... 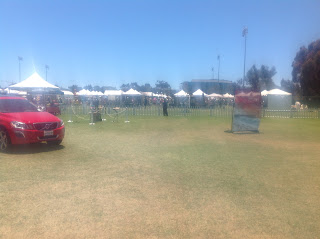 Overall, it was a completely different experience than the previous day's Street Fair.  I now know what an Art Festival is like.  It left me feeling like I have to really work on my art, because as far as I could tell there weren't many artists there who were selling things that wouldn't be accepted into a gallery.  And when it boils down to it, I guess that's what you want at a high end Art Festival in the first place, right?  Conceptually, it sort of brings the galleries to the people instead.  If I want my work to be juried into an Art Festival, I need to make sure it's what I feel is "gallery worthy".  I need to be proud enough of the quality of my art to be able to compare it to the other artists that were there, and it should hold its own.  In some respects, I wonder if it needs to be unique enough to be considered art first, and clothing second.

My eyes were opened, and I remembered a lot of comments from artists mentioning the necessity to scope out a show before applying to it.  I see now how this can be very important, as the applications can be a bit misleading...  I see now how participating in an Artist's Alley can be a very different experience from participating in a show that features artists only.  Not necessarily bad, but just a very different demographic of attendees.  If your work is geared more toward a Street Fair atmosphere rather than an Art Fair ambience (or vice versa), then you're actually a step ahead of the game--you know where you'll fit best.  It's those purveyors that are selling something that is "in between" that probably have it the hardest.  I feel like I may be one of those kinds of artists...  And I need to work on tweaking my work toward one or the other to best take advantage of the different kinds of consumers at each type of event.  The nature of my applications are going to need to be considered carefully. 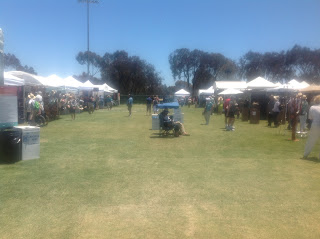 Even though the Art Festival was somewhat "intimidating", it was also quite heartening.  I learned a LOT.  It was completely worth the experience of a spending a couple hours visiting the booths and perusing their work.  While I didn't talk to any of the artists (good grief, they were busy--I thought it would have been rude of me to "talk shop" when they're trying to sell their stuff!!), I gleaned quite a bit from just watching everything and taking it all in.

I look forward to my next Art Festival experience when I can get to one.  And now I know a bit more of what to expect and what to look for when I'm thinking about applying to a show.  I know more about the difference between a Street Fair and an Art Festival, and I feel a bit more "forewarned and forearmed".