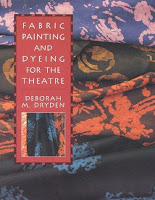 I've had a lot of on-the-job training this last week at La Jolla Playhouse.  The goal, like training at any other kind of job, is to help me be self-sufficient and execute tasks that need to be completed without my supervisor needing to do be by my side all the time.  So my supervisor in the Craft Room (where I am officially a Craftsperson for this summer's season) decided one of the things that I could do to help her out the most was to learn about dying.

Christy Jones, who is a highly skilled professional craft artisan, is developing her teaching skills at the same time.  Pretty important since most of the year she's working for the University of California-San Diego as part of their Theatre Department's production staff working with students.  So this opportunity to train me is mutually beneficial for both of us.

So, I'm learning all about dye.  First off, Christy tells me to start reading Deborah M. Dryden's Fabric Painting and Dyeing for the Theatre, which is essentially the "dyeing bible" for theatrical technicians.  Deb Dryden was actually the faculty Costume Designer at UCSD for many years.  But her book is a classic anywhere.  It's over 25 years old, but it's still relevant.  There are some "errors" in it, but nothing that a skilled painter/dyer can't point out to any assigned reader. 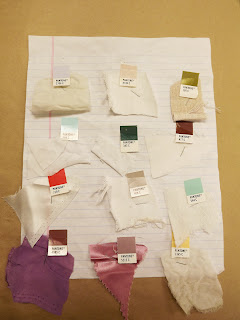 I was learning how to use a "union" dye--a type of dye that contains elements of a variety of other types of dyes.  This allows it to be useable on a variety of different fiber types.  Probably, the most common kind of union dye that we all know is Rit.  A lot of theatres have a stock of dyes, and Rit is probably the most common type of dye used by most theatres when they need to dye fabric.  It's not perfect by any means (and I'm learning there are a lot of unwritten color traits that aren't mentioned on the box!), but they're practical and useful for most needs.  Rit isn't the only kind of union dye--there's also Tintex and a variety of different brands on the market.  But most people recognize what Rit means, as it's probably the most common type of household dye. 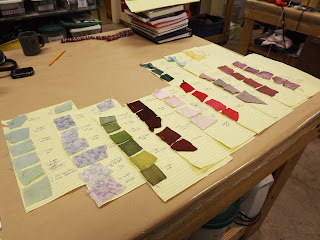 Here are some pictures of my fabric samples and my Pantone color swatches.  And here's a picture of all the dyeing that I did to try to match the colors.  You'd be surprised how fiber content, weave, and finishing can affect a color.  One fabric swatch won't come out the same as another, even though you've used the same dye bath.  So each project has to be handled individually. 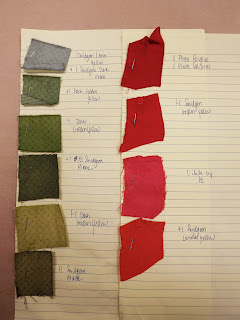 More often than not, a Costume Designer will bring in fabric and tell the Painter/Dyer that they need the yardage to be a different tone in the same color family, so it's important to have a good eye with mixing dye colors.  Repetitively sampling the coloring effects with swatches, and meticulously writing down all the steps necessary in the recipe are VITALLY IMPORTANT!  If you don't write your process/recipe down, you won't be able to repeat it on a larger scale after the Designer approves the fabric swatch's resulting color.  Only after they approve it (which may be several days or weeks later when they have the time) can the actual fabric yardage be dyed.  Dye baths only last about a half hour, then the color starts to go wonky and it won't stay colorfast. So the likelihood that a Designer will be at hand exactly when you need her to approve your color sample swatch is pretty low...  Best be ready to repeat your work on a larger scale at a later time.

So next week (time permitting) I dip the fabric yardage to match my color samples.  And see if I can repeat the magic.  LOL!  It took me a day to get all these done...  There are some painter/dyers that have to crank out 30 or 40 sample swatches a day for approvals so the workload can get done in time...  I'll be able to get faster as I learn about the traits of each color of dye... 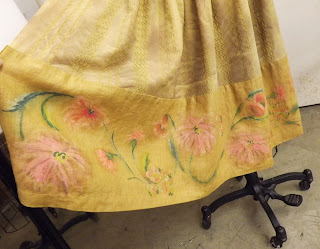 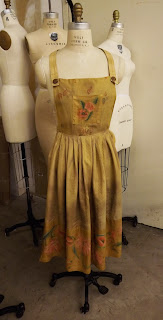 In the meantime, I got a fun project--I got to hand paint flowers on an apron for an upcoming student show at the university!!  Good thing I have experience painting flowers...  Haha!!  I got to use a combination of transparent Dye-Na-Flo and opaque Setacolor, then we dipped the whole apron in a muting mixture of Tan and Pearl Grey RIT, which aged and unified all the colors of the apron, making it look a bit more "of a piece" than something cobbled together from fabric stock pieces sewn onto a stock garment.

I think it turned out pretty good!  It was an adventure--I had to make multiple samples in different types of painting (abstract/watercolor/gouache-esque) so the designer could choose, and I have to admit I'd never tried to purposely achieve an effect before--I've only ever played around and settled on something I liked.  But this wasn't about what I liked.  This was about what the Designer needed.  So I had to put my own preferences on a shelf and try to expand my skills to give her what she wanted.  And that was a challenge, as I had to be able to control my techniques.  But it was a good learning experience.

And I'm sure I will continue to learn!!  This week we're also doing some screen printing, which I have only done once in my life, so I got to prepare the screens with photo emulsion...  And at the same time we're moving forward on the new musical Hands on a Hardbody, which should be hilarious!! But more about that later!