For Those Sci-Fi Medical People 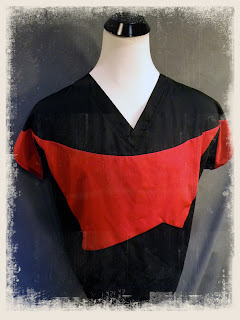 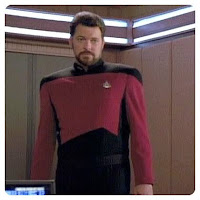 I was commissioned by a friend of mine to make him some scrubs.  He works in a facility where they have to wear scrubs to work, and he wanted something fun and unusual.

So I went and bought a scrubs pattern and set to work altering it to make it more "Star Trek-esque". 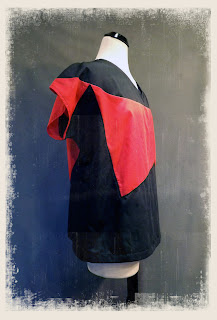 Now, the uniforms on the television show and the uniforms of contemporary medical personel are NOT similar.  For example, the television show's costumes actually have sleeves.  With armscyes.  And shoulder pads.  And the design for those uniform costumes actually sort of hinges on those armscyes to work--you kinda need an actual sleeve for the costume to look to be effective...


But scrubs don't have sleeves.  So I had to modify and piece the pattern to make it look like there was some sort of underarm seem were there really isn't any...  I'm hoping that when it actually gets put on, it'll behave in such a way that it will look like there's some sort of sleeve "effect" going on even though there really isn't a real one there... 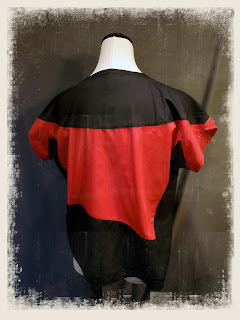 Anyway, it's done!  Who knew it would be so hard to find actual "scrubs" fabric?  I had to substitute a cotton-poly blend broadcloth for what I was looking for...  I wanted something with a tighter weave or perhaps a bit of nylon in the fabric, but I guess that was too much to hope for in my little neck of the woods.  I think the broadcloth will work, but I fear it will shrink.  And scrubs seem to be a bit more durable.  We'll see what happens once he's worn them a couple times.

A LOT of piece-work went into this--all told the front alone has 6 pieces, only two of which could be cut out simultaneously.  Everything is asymmetrical.  And the backs are different from the fronts.  So it's a bit time consuming cutting practically every piece individually...

And because it was pieced, I had to overlock all the internal edges and then top stitch them down so it would behave nicely when laundered.  The pieces had to be assembled in a specific order so the overlocking could be done easily without fighting the other seams.

But it's done!  It may prove to be a pricey little addition to my repertoire of costuming skills for anyone who might want a commissioned piece, but at least I have a pattern now so I don't have to think through that part of the process...  I think I may go back and do some tweaking on it.  I think there's too much curve in the black piece that goes across the shoulders--it needs to be more horizontal and straight across the body.  But that's for another day.

Ah, the life of a costumer/wearable art maker!  Woohoo!!