Spiders and Roosters and Leaves--Oh, My!


I've started a new adventure in my life--a diet.  I'm not incredibly overweight, but I'm getting to that age where it's starting to affect other aspects of how I live, so I figured it was time.

The diet is pretty strict, and I won't go into the logistics of it here, but I can say that I've discovered something in this first week that has really made an impact on me.  Unless I am busy, I will eat.  This isn't a big surprise, frankly, but I didn't realize how very true it was for me...  Now that I am in a position where I cannot eat, I find that I have to keep myself busy.  Or I will get hungry.  And that's not a good thing. 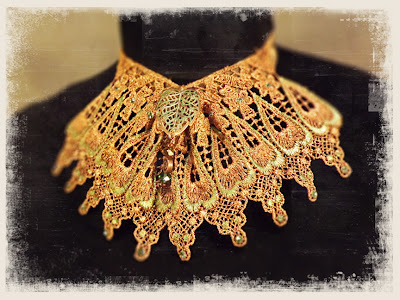 So in an effort to stay busy, I've cranked out a few more Neck Laces for my Etsy Shop and my Artfire Shop.  I have a couple of commissions that I've been working on, but it's been an interesting exercise in "distracting myself" these last couple of days...  Not only have I cut down on my food intake, but I have discovered that coffee just doesn't taste as good, tobacco leaves a horrible taste in my mouth, and my disconnected television service presents me with a black screen regardless of what channel I tune into...  So I've really been forced to concentrate on my work. 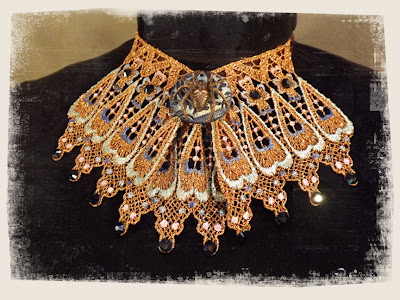 I've been able to catch up on blogs, edit photos, listen to some podcasts, and generally focus on a bunch of work that I am now learning I used these other distractions to actually avoid...  Which wasn't a surprise either, but I'm now pondering why that was so.  I think that may take a bit more thinking... 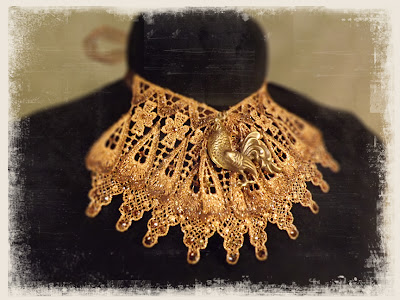 But in the meantime, I have pics that I can share of my newest creations!  I had made some purchases from one of my favorite suppliers of jewelry findings a while ago, and now I'm excited to actually share them with you!  B'sue Boutiques is a great site with lots of tutorials and how-to's.  I love what they offer, and I'm finding their selection fits perfectly into my "design aesthetic".

The first piece I made was with their Elegant Pierced Filigree Floral Leaves piece.  I discovered that the finish on the metal resembled the gold metallic lace I had hand-dipped in a Cocoa Brown Rit Dye bath--it was coppery and warm looking instead of the harsh and cold gold of the original.  So I painted some light blue-green fabric paint on the lace's motif, used some of my heat-set pale green Swarovski rhinestones, and added some beads to dangle from the leaf itself.  The colors of the beads, paint, and rhinestones echo the teal patina of the leaf itself...  I thought it was beautifully elegant!

The second piece I made featured an Ugly Spider Finding that I was able to burnish with some sandpaper to bring out a soft coppery glow under it's antiquing patina.  I mounted it on one of my polymer clay disks that I made (inspired by Lauri Mika) and painted a variety of metallic blues onto the coppery gold lace motifs.  I then applied very large Swarovski "Montana" blue rhinestones...  I think this piece is truly unique.  It's kinda beautiful, and kinda creepy at the same time...

The last piece I made featured yet another of the findings I bought at B'Sue Boutiques.  This one was a coppery rooster!  It didn't have any holes in it (I had to drill one in at the top to attache it to the necklace) but it was quite unlike anything I had ever seen before...  I had to snatch some up!  I mounted it on a coppery piece of lace that I had decorated with rich chocolate brown fabric paint.  I then splayed out 38 rhinestones in a variety of earth shades that would compliment the rich brown.  Then I realized that if I rubbed off a bit of the patina with sandpaper, the rooster looked much more dimensional, and there was a hit of shine under it's matte surface!  I think the coppery tones and brown tones work together with each other quite nicely!

So now I'm back to my studio to continue working on my commissioned pieces, getting them done quickly and efficiently.  But this has been a nice break!