My Cape Saga, or A Tale of Two Capes

I finally have a new photograph to share of some of my personal work I completed while I was working at La Jolla Playhouse during the day...  I wanted to put it up on my blog as I don't get much of an opportunity to share much of the commissioned work that I do through Relished Artistry.

I've had quite a few people request particular items that they can't find anywhere else--mostly reproductions of costumes they've seen in movies, or things that they know they can't find on the market anywhere else and have to have it custom made.  I reproduced a 1980s red velveteen vest from Watchmen for a cosplayer in Las Vegas, and recently I completed a Bram Stoker's Dracula inspired lace ruff.  I've made a few 20s and 30s costumes for various theatrical productions developing them from the ground up.

But recently I made something I've never made before:  a set of 2 white velvet capes for the reigning "Emperor and Empress" of the local drag queen charity organization, the Imperial Court de San Diego.

Now, this blog isn't about the merits of their charity organization.  Suffice to say that they have raised millions of dollars since their founding, have vast political connections in a nationwide network, and have a strong and legitimate local presence.  Nor is it about the fact that I have a LOT of friends who are part of that organization.

What this particular blog entry is about is how difficult it is to construct 2 white velvet capes... 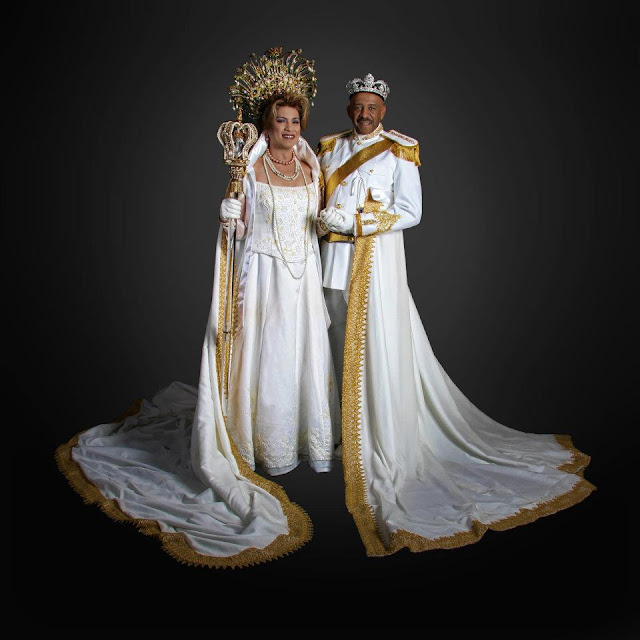 Let me give you some details.  First off, I was approached by one of the said friends above to make these capes for their coronation, which is a big expensive who-ha dinner where everyone votes and they start their year term as (essentially) coordinators of the local non-profit chapter of the nationwide charity.  It is a night of pomp and circumstance as only drag queens can pull it off--"court royalty" from throughout the world's different chapters were going to be attending--past and present, with enough rhinestones present to put the Queen of England to shame.

Secondly, their presentation garb is always white.  So the capes had to go with white outfits.  And that was fortunate, as I already had a huge roll of white rayon velvet that I had previously purchased the year prior from Dharma Trading Company.  I could use that.

Third, they wanted to make a statement.  They wanted to stand out in the glittering crowd.  Together, we decided that scale might be a good way to do that, and we decided to go big--one cape would be 2.5 yards long, and the other 3 yards long.  At the widest point, each cape would be the combined width of three spans of fabric.  This required at least 9 yards of fabric for each cape.

Off I went to sew it all together.

But wait--the rayon velvet was way too lightweight--it needed a lining.  So along comes 18 yards of white bridal satin.  And wait--I couldn't piece trim along the hem and expect it to look good!  So I had to buy trim long enough to go all the way around the hem.  But wait--I couldn't make the lady's cape finish off like the man's--it would look boorish!  So I decided to whip up a collar with rigilene stays and rhinestone edging and dangling things in the front to cover the velvet strap used to hold it on her shoulders behind her back and under the cape...

And I also figured out that I couldn't simply gather 3 entire widths of fabric into a collar--it would look very sloppy, bulky, unflattering, and ill-conceived.  Instead, I'd have to cut them at an angle so the top of each panel would be narrower and could fit into the collars evenly and the cape would get wider as it got longer.  Which meant that each side of the 3 yard lengths were very long bias cut seams all the way down the length of the fabric...  That meant they would potentially relax, stretch, elongate, and essentially behave badly as I sewed them together.  And I had to cut the velvet and the lining with matching angles. 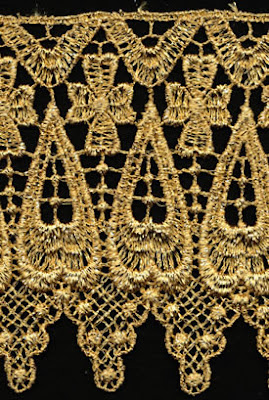 I knew all of this going in.  I accepted the parameters.  It was going to be a lot of work.  But, as with most projects, there were surprises along the way I couldn't have anticipated...

Ahem.  Have you ever tried to cut out a 3 yard-long piece of fabric?  I had to buy a special 2-yard long metal ruler to get a consistent straight line at the correct angle, borrow knee pads, and then lay it all out and cut it on my living room floor...  12 pieces.  My knees still haven't forgiven me...

Have you ever tried to hem a 3 yard long cape evenly?  I had to suspend them from clippy hangers held by a rope that I tossed over a pipe in the peaked ceiling of my garage...  Only then could I get the capes high enough to allow the cape's lining and velvet to hang freely so I could sit down on the concrete floor and match them together for a hem...

And have you ever tried to sew the scalloped edge of Venetian Lace onto rayon velvet with a machine?  Neatly?  Not happening.  I had to sew it all on by hand.  All. The. Way. Around. The. Edge.  8 stitches for each scallop!  Thank goodness it was decided the other cape would have the lace reversed with the scallops dangling over the edge--I only had to sew one cape by hand.  They weren't completely matching capes--they just had to look like a set.

But they're done.  And while the price that I quoted just barely covered the materials and didn't end up covering any of my labor, I consider it a labor of love for two of my friends.  They look fabulous.  And they'll wear them well--for an entire year, all over the country!  And there's the potential for more work coming my way, too.  I consider it a big marketing investment:  a little elbow grease now and maybe the gravy will come in the future.