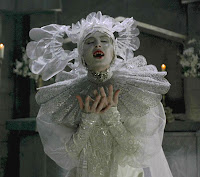 Recently, I've taken on a lot of projects that deal with lace.  I was hired by a person through Etsy to build a ruff that was inspired by 1992's Bram Stoker's Dracula, which starred Winona Ryder and Gary Oldman, and was directed by Francis Ford Coppola.  In the movie, there is a scene where the character of Lucy rises from the dead as a vampire, and she's wearing an extreme "burial shroud", complete with white lace ruff. 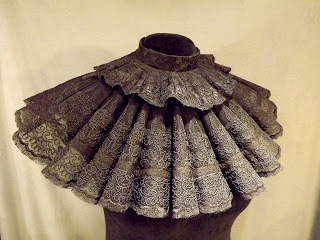 The Etsy customer wanted the same lace ruff but in black, a bit smaller, and without the beads.  I quoted them a price and set to work.

Little did I know it was going to be a bit of a challenge to pull it all together given the amount that I quoted her...  The lace itself required a special trip to Los Angeles to acquire, was much more expensive than I had anticipated, and some of the other materials that I needed required purchase in bulk, so I spent more money than I had estimated.

But it was a good experience none-the-less.  I learned a LOT.  I thought I might post some pics of the inspirational screen shots and some of the finished product, as it was an incredibly unusual piece for me that I might contemplate modifying for my own purposes someday. 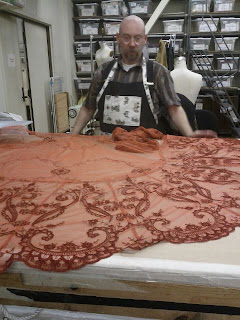 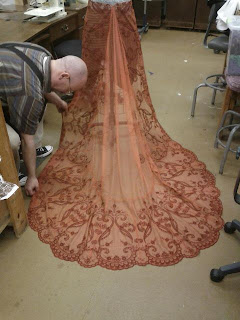 The second lace project I've been working on lately has been at La Jolla Playhouse.   They are doing a series of dance thesis projects, and for one a large lace train is required.  The grad student designer purchased some lace that was dyed red, then given to me to make a flat train out of it...  3 yards of fabric, with lace motifs along each edge.  The requirements:  no gathering at the waist, make it 6 feet long, and make it flat with the scalloped edge of the fabric on the outside, starting at the waist band.

Knowing that I had 6 yards of edge to work with, I developed a train starting from the outside in.  I used darts to force a curve into the outer edge of the lace, and sewed it onto a teardrop shape that extended from the waistline downward.  I cut away the fabric left over in the darts, overlocked the seam allowances, and top stitched all the seams down.  Oh, yeah, when sewing the darts, I had to match all the motifs in the lace...

But it's done!!  And now I'm developing a waist cincher to go on the top to which the train will be attached.  I'm proud of this one...  All the darts were made by hand by "eyeballing it"...  Took me all day...  Whew!

And that's me behind the table with the bald head... Hello!