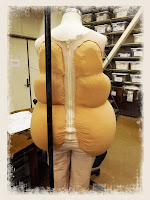 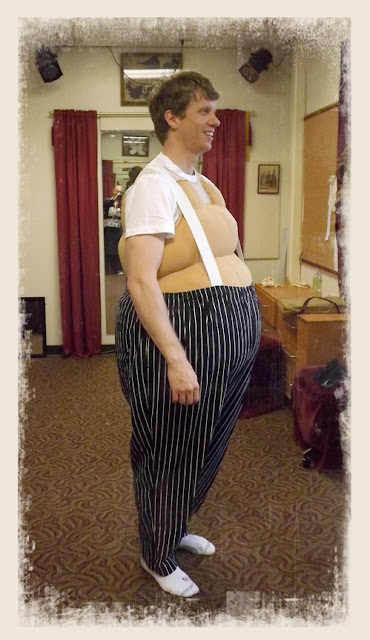 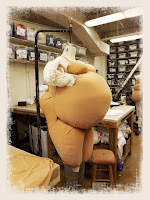 My last post described some of the work that I was doing at La Jolla Playhouse for their POP Tour, a travelling show for children called Recipe for Disaster.  I put up some pics of the fat padding that I was working on "in progress", but today I've pics of the finished product!

After completing the the sculpting of the pillows, I machine-sewed fabric covering over the pillows--a beige-toned spandex that would almost appear "flesh-like" under his clothing.   The spandex stretches over the pillows, keeping them secure and whole as a complete unit.  All the actor has to do is step into the suit and zip it up the back.  Under his clothes, it has a bouncy quality that is very similar to actual flesh, but without the weight.  The actor can do all kinds of physical tricks that are unrealistic for a man of this actual girth, without harm to his person. 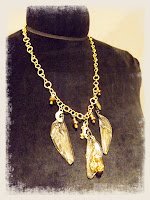 Because some of the actors are in unusually shaped bodies, we had to adjust the clothing to accommodate.  We had to let out some 5X shirts by adding panels in the side seams and center back.  We adjusted the pants by shifting down the waistband a bit at the side seams so they would fit better.  I also made a chef's hat that was almost 2 feet tall, making the actor even taller than his natural 6'3"!  The hat I had to put rigilene bones into so it would stand up, as well as a chin strap so it wouldn't fall off.  The pic is of the actor, not me. 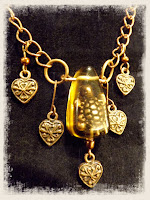 My colleague, Claudia La Rue, also made a fat padding of her own in a different shape for an actress significantly smaller than the actor I made mine for--the goal was to make him tall and pear-shaped, and her small and round.  I think Claudia did a great job on her padding--it made the actress look like a giant basketball!!  Haha!!  Her's was a bit more complicated than mine, requiring padding on the arms and legs because the actress is much smaller and it would look too fake if it wasn't there.  In the pic, it's not quite all covered yet.  Her's took much more time than mine, as mine had very basic shapes in comparison and Claudia was using two different types of foam--pillow foam and air conditioning foam (which is significantly lighter but requires more sculpting as it doesn't "compress" the same way as the pillow foam). 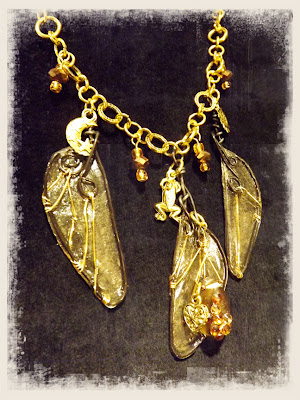 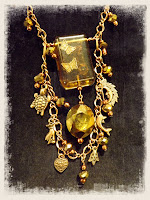 But they're done!!  And I think they're going to be incredibly useful for the Playhouse in the future--they're quite unrealistic and comical, so if they ever require something in that vein sometime in the next 3 or 4 years they'll be available.  Foam degrades over time, so they won't last forever, but they'll still be flexible for a while so hopefully they'll get their money's worth. 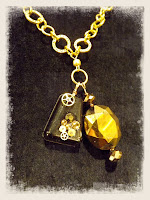 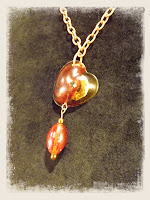 The other projects that I've been working on in my home studio include resin-cast jewelry that has turned out pretty cool.  I've played with resin casting before, but this is the first time I've been able to experiment with inclusions.  My favorite features some wire faerie wings that I glued tissue paper onto and then coated in resin, further developing an example that was in Enchanted Adornments by Cynthia Thornton.  I used armature wire form the outer edge of the wing, then took smaller guage gold wire to create the striations.  Gluing a layer of tissue paper behind it, I coated the whole thing in resin which made the tissue translucent.  I dangled a bit of my amber-colored resin in front of the center wing, on which I attached rhinestones.  Add some charms, beads, and some interesting chain and voila!  I put a magnetic clasp in the back--do those work better than when they first came out?  They seem a lot stronger nowadays... 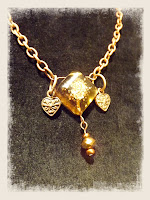 But I have to slow down.  I've completely run out of chain, frankly, so I can't make any more jewelry pieces...  I understand now how they're so addictive--I have to stop.  I. Have. To. Stop. Making. Jewelry.  I'm feeling a bit at a loss, as I can easily lose HOURS of my day to it...  Sigh...

But the resin casting is a lot of fun, too--I've tried some amber-ish coloring and some aqua coloring that have resulted in some wonderful pieces that I'm going to use in some of my tin can mobiles.  All in all, I made eleven pieces, but not many of my pics are actually useable as the quality is too poor without some form of editing.  I think I'll need to retake most of them using my little paper "lightbox" that I made and contrasting them with some textural but featureless background or props.  We'll see.  I certainly won't be posting any of them on Etsy without improving their quality, that's for sure.

I'm heading into the last two weeks of my contract at La Jolla Playhouse, and then I'll be diving back into Relished Artistry with a vengeance!  I've got more to share regarding a special black ruff and a couple white velvet capes...  : )

Until then--Live Life with Relish!