"And what do you do for a living?" she asked. "Fat Padding," I replied. 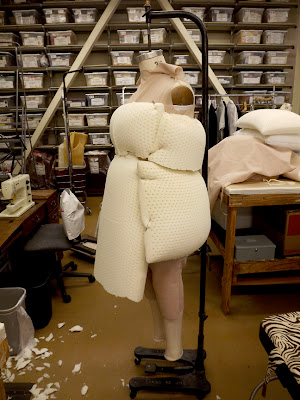 Seems like I'm always apologizing for not posting enough on this blog...  Not this time.  I've been busy, and I simply haven't prioritized writing new entries for my blog because I've had other things on my plate.  Like holding down an overhire position at La Jolla Playhouse working on their touring children's show, which they call POP Tour.  This year's production is called Recipe for Disaster, and features a cooking school with comedic chefs that try to undermine each other in their efforts to teach a young apprentice.  Food fights, climbing in and out of a refrigerator to visit Antarctica, and general hilarity ensue.

One of my jobs has been to make a fat pad for Chef #2.  He's 6'3", and we're making him taller!!  I made a chef hat for him with boning on the inside that makes him another 2 feet taller!  I also have to make his padding, and I'm pretty happy with it.  I've used these types of pillows before to make padding in the past--especially pregnant pads.  But this is the first time I've used them on a large scale on my own to actually create a fad padding from start to finish--I've only ever worked on teams before and simply did what others told me.  Not this time.  It's all me.  It's my responsibility to get it done. 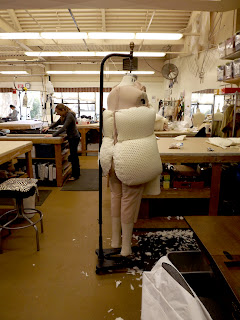 The process of making this type of fat pad is interesting.  First off, selecting the right kind of foam padding is essential--the wrong kind of foam can create an artificial body shape that doesn't move naturally, and looks even more fake than it actually is.  We chose a special kind of pillow foam that has a soft, gelatin quality with a lot of reflexive response, making them seem very "flesh-like".  The pillows are pricey, though--around $50 for a king size--so when you're using 3 of them you can imagine how expensive these things can get.  (Add in the other needed fabrics and then a week of labor...  Fat-pads are not cheap...)

The foam is mounted on a body suit or leotard, depending on how much you actually need to cover.  We used Powernet--a nylon spandex fabric more commonly used in girdles and other undergarments.  We make the original body suit a bit smaller than the measurements since it needs to fit the body snuggly so the weight of the padding doesn't cause sagging. 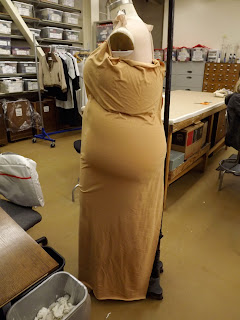 Then padding gets pinned on in whatever rough shapes are needed.  You really need a dress form to do this--I can't imagine not having one that I could pad out to the actor's measurements...  This requires some sculpting skills.  Some padding is ultra-realistic, some of it is more abstract and comical.  My particular body padding is supposed to be "pear shaped", and relatively non-realistic.  So I didn't have to pad out the arms or legs because that would have been a bit too real, and taken away from the comical pear-shape we were trying to achieve.

Then the whole thing is fit, the padding modified for any changes, sewn onto the powernet by hand all around the edges, and then sealed in spandex "pockets" so it doesn't shift around.  The photos at the right are right were taken right before the initial fitting.  The front pillow dangling down in front hadn't been trimmed into the proper shape yet.  After the fitting, some changes were made and I finished it up by draping beige spandex all around it.

And that's what I've been working on for a bit.   Among other things for this project--pants, neckerchiefs, sashes, chef hats...  It's been a busy couple of weeks, and it all has to be done by this coming Thursday, as they begin technical rehearsals. 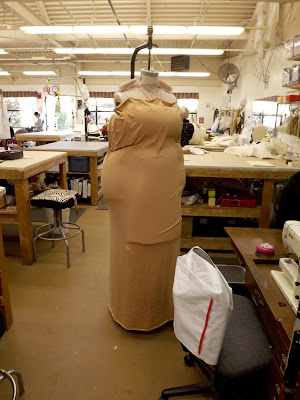 You can see the costume shop at the University of California-San Diego in the background of these pics--La Jolla Playhouse and UCSD share the space.  Honestly, it's a great place to work--the floor has a special rubbery quality that makes it easier to stand on, and there's an entire bank of windows on one wall that make it bright and sunny.  The people are very nice, and it's thoroughly outfitted with alost anything that might be required (everything from a custom fabric button press to a corset bone tipping machine).  I think the most impressive aspect of their shop is their costume storage--it's catalogued, mapped out, and fantastically organized, making it so easy to find things it's ridiculous!!  I'm enjoying my time there.

On top of all this, I've had several projects that I've been trying to work on at home, ranging from resin jewelry (11 pieces completed!), a ruff inspired by a movie vampire, two 3-yard-long white velvet capes with gold trim, and a Greek goddess outfit.  My plate has been very very full, but the weather here has become quite chill so it's been hard to work outside in my garage.  My poor little space heater just can't keep up...

But more about all these projects very soon, and more pics of the completed padding!  Until then, Live Life with Relish!