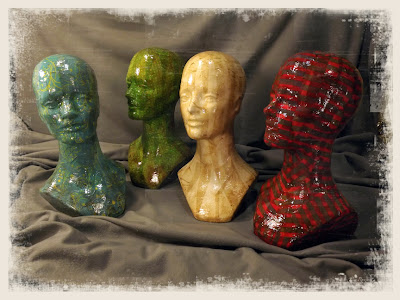 I've been slowly working on display elements for my potential fair and festival booth of the future.  I bought some styrofoam display heads a while ago and experimented with applying old sliced up patterns to them with acrylic gloss.  Then I applied brown transparent ink over them to age them, and finally a layer of thick glass-like gloss.  They turned out pretty well, but I realized quickly that they were too potentially distracting, pulling attention away from what I was trying to actually sell...  They were so visually interesting that they were a "thing" of themselves, and whatever I was trying to use them for to display would simply get lost... 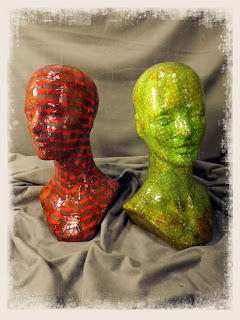 While this was discouraging, it was also inspiring.  I had three thoughts--1) try something else to coat them with (other than pattern paper, which you can see here), or 2) try a darker base than the white of the styrofoam and perhaps the lines wouldn't be so apparent.  They were looking rather "cybernetic" and not "rustic", so I had to try something...  I put them up on my Etsy shop (in the hopes that they might sell to someone else who could use them more readily) and bought some more heads to experiment with. 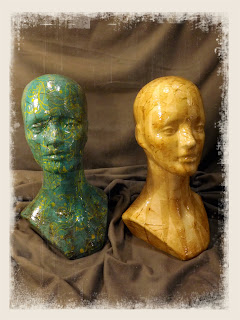 My third thought was completely different--"Wow, I could really do some neat artistic stuff with this...  Like some really cool found object sculptural assemblage work..."  I've been contemplating using the heads in something bigger, something more substantial.  What that is I don't know, but they look so intriguing and creatively stimulating I have to think of something...  I haven't done anything with them yet--they're displaying some of my ruffs in my own living room right now.  Any thoughts?

Anyway, I finally got to a point where I could take some photos of the work that I've completed on the new heads thus far.  I used colorful tissue paper with a "circusy" feel, and then I bought some simple unmarked wrapping paper used by stores to wrap up clothing and and other items at checkout counters.  It has a papery color, and was very cheap in bulk.  I have SO MUCH of it left--it really doesn't take that much paper to coat one of these...  I've even used multiple layers...  Anyway, these photos are the results of my experiments. 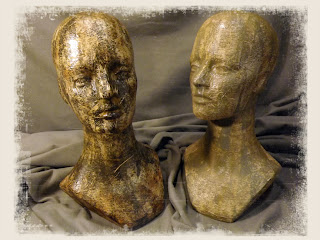 The four colorful ones in the top photos are coated in that Triple-Thick Gloss Glaze that I bought, but the last two aren't dry enough do that...  The last two heads I coated in black and grey gesso before applying the paper so they would contrast to the one I'd done on plain white styrofoam.  It took a couple coats of gesso, but I think they're going to be the best of the lot.  They have a "rock" feel to them that is really interesting...  I may end up adding striations with acrylic paint on top of the gesso if I continue to do this...

You know, as I type this, it occurs to me that it might be interesting to manipulate the features of the styrofoam by adding paperclay to it, subtly changing the face to something less "perfect" and possibly more realistic.  Lots of dollmakers start with styrofoam balls for their doll heads and do just that--building up features they then paint.  I'm now wondering if it's possible to then paint clown features on it with acrylic paint, and layer the paper over the top of that, giving a very aged and weathered look like I've seen others do with crackle medium...  Hmmm... Then add a ruff, and a hat... Hmm...  Sounding more and more like an interesting sculptural experiment for the future...

If I actually sell any of these heads on Etsy, I'll make a lot more indeed, but right now the original ones done with the 1980's Butterick patterns are just being "favorited" a lot.  It's a great idea and too easy not to do one's self, so I can understand that.  I haven't listed any of the others.  And besides, they look great in my house!

I've been working on more neck laces, but I don't want to inundate everyone with post after post of new "product" through my blog.  So I'll wait to make a post about a bunch of them all at once, and try to focus on some other things first.