On Purchasing a Fair/Festival Tent

Well, I finally bit the bullet.  I bought a tent so I can go to art fairs and festivals.  It was a pretty penny, to be sure, but I plan on having it for many many years, and I got a lot of features that I find appealing.  Thought I'd share what I went through to make it happen...

There have been a lot of different things said about different types of tents, and everyone has their favorite brand.  There is a huge variety of different kinds of tents to choose from when you're thinking about making a purchase, and there are a lot of people out there willing to tell you exactly why you should choose their preference over another.

Being in the "clueless boat", I had no idea where to start.  There are a couple of great blogs that I started following, but Michelle Sholund's Quick Craft Artists Tips You Need to Know seemed to be the most interesting and helpful.  I also joined a forum, Art Fair Insiders, and found a helpful group of posters that were very willing to assist newbies as long as I took the time to explore the site for answers to my questions that had already been given numerous times.  I had an unfortunate run-in with a flamer who tried to stir up trouble, but the forum proved her completely out of character and really stepped up to make me feel welcome.  I wrote about it in my blog post, here. 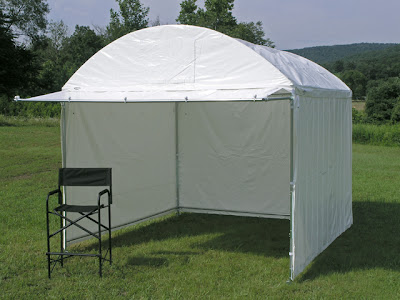 So today, I just had to put my money where my mouth is and dive in.  I bought a 10x10 TrimLine tent from Flourish.com.  I'm very happy with my choice.  I had lots of alternatives--Light Domes, Craft Huts, EZ-Ups...  I decided that I was going to potentially have a lot of weight mounted to the walls of the tent with gridwalls, etc, so I opted to go for something a bit sturdier than an EZ-Up which can sometimes be a bit flimsy (I've read).  That, ultimately, was the motivating factor behind my decision to purchase a TrimLine tent instead of other brands.

Ease of assembly was not an issue for me--I was a Boy Scout for a while (albeit a short while) and I'm quite capable of putting up tents.  And as  long as I'm organized, I'm pretty sure the tent assembly process is not going to be a burden.  I'd watched the videos.  I'm feeling pretty good about it.  So that meant the ease of assembly for an EZ-Up tent was a non-issue, and their main selling point was moot on me.

It really boiled down to whether a Light Dome was my choice or a TrimLine.  And the TrimLine simply seemed sturdier and had more features that I could choose.  I got more structural stability, a semi-translucent roof so I don't have to worry about lighting too much, and some awnings that are really going to be nice.  And I was able to purchase it at a height of 8 feet, not the standard 7 feet.

Yes, I'm sure the Light Dome has all these options, too, but I would have had to ask in a phone call how much they cost, and I didn't want to have to debate things with a salesperson.  Instead, I simply called up TrimLine in Florida (a far cry from San Diego--shipping is going to kill me), talked with Luke and told him everything I wanted, and it was done.  Luke was nice, affable, and extremely helpful.  He offered some great advice, and walked me through the whole thing.

Ultimately, I don't anticipate that there is much price difference between the Light Dome and the TrimLine when you add everything up. And both are in Florida, so I couldn't save money on shipping either way...

So.  It's done.  I'm sure there are lots of people that may say, "You should have done this or that or the other thing," but I refuse to have buyer's remorse!  I have been planning the layout of my tent for a long long time, and I'm really excited about having the opportunity to practice packing everything into my little Nissan Cube and assembling it all, then disassembling and packing it all away again...  I have been contemplating display mechanisms for a while and fleshing out the "look" that I want.  I still have a lot of exploring that I want to do (mirrors, hanging display forms, battery-powered lighting) but I'm not worried.  I feel like I have a starting point to work with now.  And that makes it less conceptual and more real.  Buying the tent has provided some limitations which I can work within, which in the end actually become "de-limitations" because they allow me to move forward.

Whew!  Now to start exploring local farmer's markets and street fairs--the next steps toward actually getting myself out there, and then on to bigger and better art festivals.

Time to get back to the studio!  Live Life with Relish!