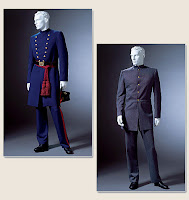 So I purchased a pattern a long time ago for a show that I designed that needed an American Civil War outfit.  McCall's 4745 worked out pretty well for me, and it was a lot faster to construct than I anticipated.  I was a little wary of what they were eliminating from the whole tailoring process that goes into a coat, but it turned out looking alright in the end...  I think I can definitely say this is not a tailored coat, that's for sure, but for a Civil War look, and knowing that a most of those coats were not made by tailors, I think this look is fine for it's purpose.  I wouldn't know if it's "historically accurate" at all, but in the end it's a good costume version of a military coat from that era.

I knew that at some point in the future, I wanted to explore some more possibilities with the pattern.  There were a lot of things that I didn't like about it--a lack of shoulder pads, no real internal structure, and (what I felt) were funky "pleats" in the back--but for all that I wanted to give it another shot.  It simply came together too quickly not to give it another try. 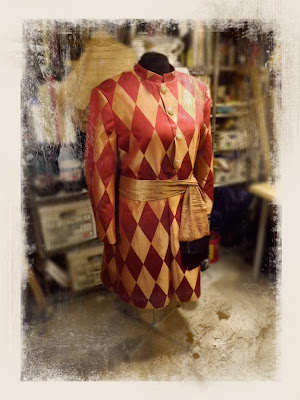 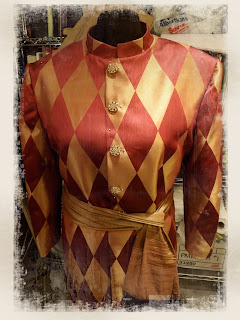 I got some fabric that I fell in love with and felt fit into my newly developing Relished Artistry identity, and the last couple of days I've thrown together a new coat using that McCall's pattern.  I also taught myself how to do some bugle cords (still looking for a source for the metal tips) that I can put on the shoulders, and I want to do some Hussar Jacket style corded embellishment on the front, but for the most part it's assembled...  Well, at least enough to take a couple preview pics!  And I wanted to share them with you really quick, as I'm excited about the potential for the future.  I've purchased more fabric in a similar vein as this diamond check (with smaller checks in antique gold & cream, and antique gold & sage green), and I think I'll make some "frock coat" looks with those.  Because of the nature of the high collar, this look is much more in a military style, and begs to be embellished.  I'm thinking about purchasing some epaulettes that will go well with my bugle cords, too! 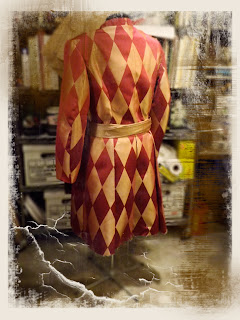 I made this one quite large--a size 46/48--just to see if something like that will sell in my Etsy and Artfire shops.

Anway, we'll see where this goes.  Once I had cut it out and started to assemble the top portion, I suddenly worried that it looked too much like a horse jockey's outfit, but then the lower half of the coat came together, and I realized that no, a jockey wouldn't wear something like this.  It almost has a Persian feel to it, I think.  With the embellishments I'm planning, I think it may pull it into a circus realm quite a bit.  This coat is already very "costume-y" though, and if I push it even more toward that specific circus world, I think it loses some of it's versatility.  Right now I could see this being worn with a turban for a crystal ball scryer, or even with a baldric or fur cape for a pseudo-Russian court feel.  It's  just neo-Victorian enough that it could smartly enhance the right Steampunk cosplay character if one was looking for an eccentric or aristocratic look, too.

My goal is to start creating garments that have a certain "flair and flavor" to them.  The colors in this particular weave are kind of "muted" with a slight brown tint, giving it a rather antiquated feel.  I could even step into a world of "faux-vintage" by distressing all the decoration that I'm planning on putting onto it, but I'm not sure if that's a move in the right direction...  I must say, however, that I am incredibly attracted to the "aged found object" feel of assemblage, and the jewelry that is being put out by Deryn Mentock of Something Sublime is really very interesting to me.  If I could translate the style of her jewelry work into clothing, and incorporate bits of that feeling into my own work, I'd be a very happy man. I'm not interested in copying her style or even reproducing it, but if I could figure out a way of infusing how it makes me feel into my own expressions I'd be very very excited.

I think this is a good addition to my body of work, and certainly much more along the lines of what I'm thinking of for Relished Artistry.  It's an odd piece, by itself, but it's still got some growing up to do.  : )