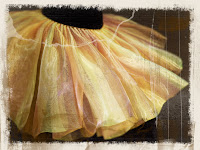 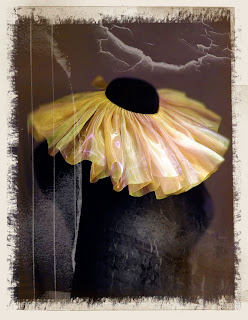 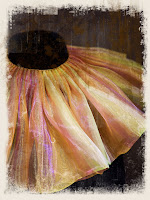 Costumes have become more and more popular over recent years for all kinds of celebrations, the most popular of which (in the US) is coming up at the end of this month! Halloween is famous for goblins and monsters, witches and ghosts, but there are lots of other costuming possibilities that don't require exploring the spooky or scary... Which leads me to the second of this week's posts about the recent pieces I've put together.

I purchased some curtain sheer fabric from my local "fabric warehouse" a long while ago, and I've been slowly using it up for a variety of projects. My latest piece is a soft, romantic ruff made for ladies with long hair so they don't have to put it up in a bun. It's made almost the same way a "traditional" ruff is made, but this drapes gently over the shoulders instead of standing out stiffly from the neck.

This kind of ruff is more popularly seen in clown figures rather than historical reenactments. It's got a quality about it that is decidedly less "formal" than most historically accurate ruffs. I doubt it's something you'd find at a renaissance faire since it's not "authentic" enough, either. It's simply what it is--a pretty expression that's more appropriate to Carnivale, Mardi Gras, or a Venetian Masquerade than in someone's Elizabethan attire...  It's for sale in both my Etsy and Artfire sites.

There have been some famous clowns of yore that have worn soft ruffs like this, but most notably the Commedia dell'Arte inspired "Pierrot". From Wikipedia:

"In short, Pierrot became an alter-ego of the artist, specifically of the famously alienated artist of the 19th and early 20th centuries.[3] His physical insularity; his poignant muteness, the legacy of the great mime Deburau; his white face and costume, suggesting not only innocence but the pallor of the dead; his often frustrated pursuit of Columbine, coupled with his never-to-be vanquished unworldly naïveté—all conspired to lift him out of the circumscribed world of the Commedia dell'Arte and into the larger realm of myth. Much of that mythic quality still adheres to the "sad clown" of the postmodern era."

This ruff embodies many of the characteristics of the Pierrot clown that inspired it--an artistic naïveté, an innocence, and an optimism that is very different from the harsh and strong edges of a regular ruff. Unlike Elizabethan ruffs with blackwork around the edges, this relaxed and informal ruff isn't haughty or stiff, nor formal and direct. It is gentle, childlike, and hopeful.