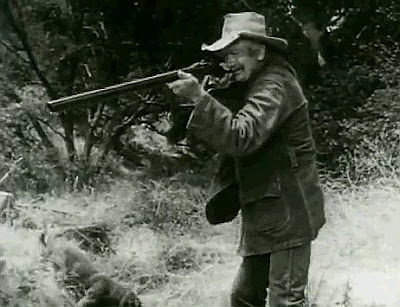 Let me tell ya a little story 'bout a man named Jed...

I found a fabric this weekend that was very unusual for me--a luscious teal and chocolate stripe with a gorgeous golden brocade woven through it...  The brocade looked like the kind of pattern that would be on a ribbon, but it was woven over the stripes in this small piece of yardage... I found it in the scrap bin at my local upholstery fabric store (again) and had to snap it right up, because I'd never seen anything like it...  I thought, "Wow, something really cool could be made with this--I don't know what, but something awesome, I'm sure!"

This was a raw material resource mined from the undulating hills of the Bargain Bin expanse.  This was crude that would provide food.  Fabric gold.  Textile Tea.  Time to head back to my studio, the Beverly Hills of my backyard...

I've never been interested much in wearable art that is made out of "unusual" materials...  I think that's a one-trick-pony in a way...  It's interesting to make a dress out of sporks or grass sod or condoms, but those kinds of garments are only "wearable" for about 10 seconds...  They're beautiful, whimsical, and awe inspiring, but not practical.  And who wants to buy wearable art that you really can't wear anywhere?  And you can't sit down in?  And chafes?

So I've never been a big fan of wearable art made from non-traditional materials, as each piece I've seen has been less and less "wearable" and more and more "art" that needs to be propped up in one's living room or just appreciated on a hanger. 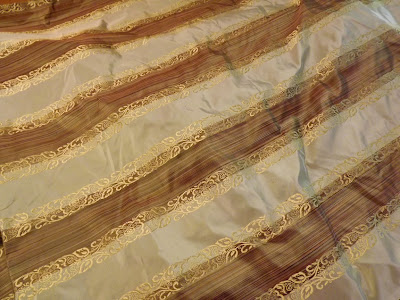 I'm not saying that's not a valid, beautiful method of expression, it's just not what I prefer...  And I'm not saying there aren't other kinds of wearable art.  The hand painted pieces or unusually inventive fibers, the unique construction methods or the wild sewing technique--these are all things that can make a piece of wearable art that I, personally, appreciate a bit more. Wearable art of this nature straddles the two contrasting worlds of the artistic and the utilitarian, but leans more toward the "wearable" side.

I think, if you're going to buy "wearable art", you should at least be able to physically wear it.

That being said, I'm not sure an artwear maker can provide you the venue at which to don it...

Which leads me back to my fabulous fabric find this weekend.  I had a material that I knew I wanted to use, but no idea what to do with it.    It's very nature was different than anything I had encountered before.  It was silk, had a "refined" character about it, and ultimately had big broad vertical stripes...  Those stripes were so wide they dictated that anything made out of it had to be of a scale that was also commensurately large.  Like a large, full bustle dress.  I didn't want to make a bustle dress.  I only found a yard and a half!

So instead, I made something else relatively useless to a contemporary person:  another ruff!  But this one had bands in it and texture that was absent from the previous pieces I had created.  It was also large enough to go all the way around the neck, like a traditional ruff.  And I haven't seen many ruffs "on the market" that are made out of something other than lace or linen. 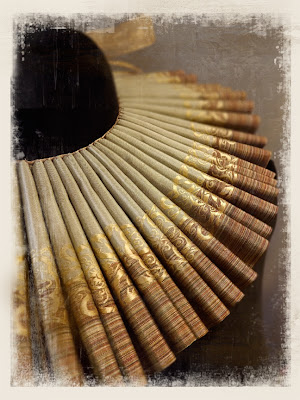 I'm not sure I know what this piece is actually good for.  I'm not sure I could say to a customer, "Oh, this would be perfect for such and such!" because I can't really envision an event where something like this would be appropriate attire (outside of costume purposes)....  But then again, it's easy for me to imagine events and affairs where my other artwear might be appropriate, so why not this?

And suddenly I found myself in a quandary:  I had just created a piece of wearable art that can be utilitarian, but is more likely an art piece purchased to simply look at.  I had created exactly what I didn't like about wearable art...  [Open mouth, insert hat, begin eating...]  And yet, I loved it...

And THAT got me thinking:  If a person is going to buy a piece of mine simply for display in their home, I need to consider what it is displayed on as a part of the complete look.  I need to provide the mounting mechanism that a person uses so my pieces can actually be displayed proudly as a unique and visual piece of art that happens to be wearable.  In short, my piece becomes soft sculpture, or even a mixed-media assemblage if done well.

You remember when it was all trendy to collect African masks and pieces of armor and bracelets and simply display them, mounted, on a wall or in a corner on a stand?  (Incidentally, people have displayed pieces of what they considered "exotic culture" in their homes for centuries--it wasn't just a mid-80s phenomenon.)  For that matter, what's the difference between accessorizing your house in the Baroque style, or with Native American pieces?

So why can't I do that for my stuff?  Why can't I create a beautiful stand for the ruffs I make that is an extension of their personality and character and charm?  And then sell the entire unit as a sculpture?  It would be like Dega's dancing ballet sculptures, or a museum mannequin but with more depth and participation in displaying the personality about the piece?

So.  If I'm going to continue exploring this nostalgic carnival world of dreams and dust, magic and memories, I think I may need to explore the "framing mechanism" that bridges the work I'm doing to the justifications people might need to actually purchase it.  If a person can't actually wear a piece of wearable art, what do they do with it?  What then does it become?  And what does a person need so they can be convinced they should buy it?  Perhaps a display tool for their home would be a good start...

Maybe, in some mansion somewhere, there's a Jed Clampett that might find my fabric gold creation appealing to them. I'm certainly looking forward to exploring it!