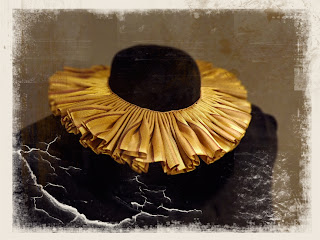 I love my local upholstery fabric store.  It sells a lot of fabrics that I simply cannot afford, but there is a bargain bin area in the back that features several racks and tables full of all kinds of small scraps.  Some of them are big enough to make a pillow out of--some aren't--but there are sometimes chunks of stuff that are big enough to make a vest front out of, or even...  a ruff.

I've made quite a few of these little "gems" lately--I'm really having fun making them out of unusual fabrics, and this time is no exception.  I found some curtain sheering at the upholstery fabric store amongst the piles of strips of damasks and brocades, and it reminded me so much of a "vintage circus" I had to get it.  It was screaming out for me to take it home.  What could I do?  I like to think I did a good deed and saved it from fabric purgatory. 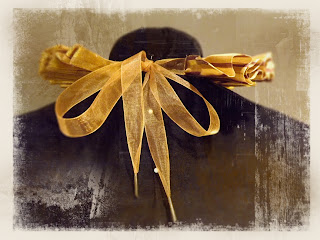 I hoarded it for a while... I made a cravat for myself to wear with one of my vests that I made, and mulled over what else to make out of it for a long time.  Then I decided I just couldn't sit on it anymore, and quickly cut it up into pieces so I had to actually use it for what I was cutting it up for!  It was painful, but exhilarating to be moving forward with it...

The reason I held out on it for so long is because the fabric has a wonderful appearance that I haven't seen anywhere else... It's gorgeous silk.  It's woven with a gold thread and a deep maroon thread in stripes that gradate from predominantly maroon on side of the fabric to predominantly gold on the other...  The reverse side echoes the gradation but in the opposite direction (like most brocades would show the reverse of the image).  Between all these silk stripes is a woven, semi-transparent stripe, giving the entire fabric a transparent quality that, frankly is... just... frickin'... beautiful.  To me.  It is gentle, and masculine, and refined, and vintage-feeling all at the same time.  It has this wonderfully warm golden tone that is just hypnotic to me, and a soft sheen that isn't "slicky shiney" but somehow mature and reserved.  It steams and presses like butter. 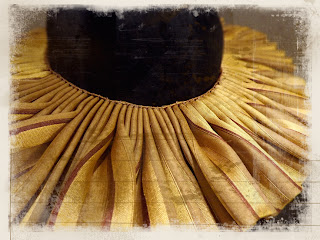 After cartridge pleating it, I mounted the whole thing on a gold organdy ribbon completely by hand.  Well, it's hard not to do a ruff by hand, actually...  I finished off the ends of the ribbon with aglets so they wouldn't fray, and once I had each ruffle mounted by hand, I actually took out the cartridge pleating threads so it would fall more naturally and informally.

You can't really tell the fabric is semi-transparent much from the photos, but the other items I made out of this fabric make that much more apparent. 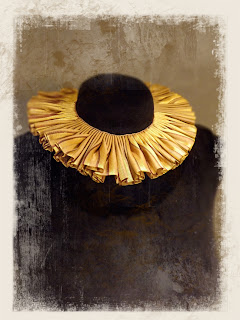 This is one of those things that I feel gives "dumpster diving" a good name.  I swear--most of my best items in my stash are from these discount bargain bin areas!!  I mean, really!  I've purchased oriental brocades that were inadvertently stained, which I washed away (and made a frock coat out of it).  I've purchased rayon velvet that had holes in it (hello collar and cuffs).  I've discovered old wools (that became a retro-inspired jacket).  My fabric stash is bursting with potential projects and fabrics that I just "know" I'll use someday...  What is that saying?  "She who dies with the most fabric wins"?  Well, I know I'm a guy, but at this rate I'm gonna give every single one of you a run for your money!!  Look out!!  Haha!

From ruffs to scarves to cravats, this was some of the best fabric I had ever purchased, and all of these things are going onto my Etsy and Artfire sites soon.  I am going to go back and look for more, but I'm not expecting much...  Isn't it fun to make these little "one-off" gems?  It's like you have to commit to whatever it is you've decided to make, and know deep down inside that this fabric was meant to become what you've planned for it.

I sometimes imagine those TV commercials that animate common everyday objects like window cleaner (Arm and Hammer) or tastebuds (Snickers) or dirt and mud (Swiffer).  I "personify" my fabric sometimes, in my head (yeah, I know... "wacko"...  But I have fun, darnit!)  Somewhere long ago, on a factory loom, this fabric's fellow yarns were all excited about becoming window dressing.  But this couple of yards of yarn found a home as a real, authentic piece of wearable art.  These yarns are going to see much more of the world than the curtain sheers will.

I think they're excited about that.