There are a lot of things that we look at differently when they're placed in a different set of surroundings.  A color can seem brighter or darker depending on the colors around it.  An object can seem dirty or old  but when surrounded by a different setting it can instead seem to have age and character.  A piece of jewelry takes on a whole new light when worn with the right outfit.  It's all about "context".

When you look back on the different styles of clothing we've had through the different eras of mankind, one really begins to understand that we can wear a lot of weird looking stuff depending on the "context" of the situation.  When one looks back at the Renaissance Era of Western Europe, one might look at the weird shoe shapes and the incredibly heavy cotes and surcotes and ridiculous hats that they used to wear and wonder, "How on earth could they have thought that was okay to wear?" 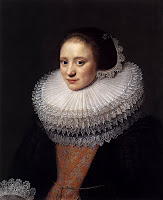 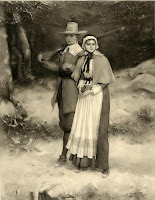 One only has to turn around and look at today's young men wearing jeans down at their hips to answer that question.  Peer pressure and social acceptance can be a powerful force.  It's common knowledge that royalty sometimes set the tone for their courts--Marie Antoinette and her "shepherdess" looks were quite the rage (as she played with romantic notions of being "simple", but was really striving to make herself feel more "authentic and real").  One can see the power of some of our TV, movie, and music celebrity fashion decisions and the impact that has on our culture (albeit, I think this is decreasing as we're all coming to recognize it more as "media-inspired imitation" that doesn't say much about our own personal tastes, nor our ability to make them for ourselves...). 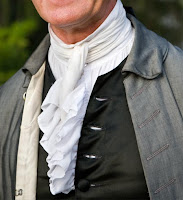 A ruff is a perfect example of a garment that became a symbol of aristocracy, then succumbed to social pressure so much it disappeared.  It started out as the top of a shirt collar.  It got bigger and bigger, and soon it developed into large pieces that were tied on and propped up with wire understructures.  Soon they were being held up behind the head in a sort of "halo effect" (called as "wisk") that was rather akin to walking around with your own green-screen background... 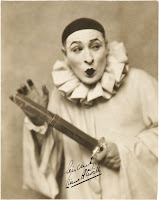 Someone popped the balloon eventually, and the ruffs went flat.  That's where we get the "pilgrim collar" look--it's descended from a ruff with all the "poof" let out.  At the time, it was less ostentatious,  and showed dignity and seriousness.  From there it morphed once again, this time to be worn upwards with cravats and jabots, and then eventually to the more contemporary expression we have with ties.

So essentially, today's men's collars are descended from ruffs.  Who knew?

Since ruffs died out from traditional wear, they've been relegated to a more costuming arena for various types of "clown" figures... Clowns in ruffs are, incidentally, a rather subtle political comment on class...  When wearing a crazy accessory like a ruff, a clown figure is saying something about the ridiculousness of one's appearance.  Historically, only the extremely traditional, rich, or conservative would wear a ruff and most clowns are none of those things.  In fact, it is more common to see a clown getting into ridiculous, out-of-the-ordinary situations that are hilarious by virtue of their incongruity or extremism.  It makes it funnier to see traditional, rich, conservative people (who are stereotypically concerned with their appearance) struggling to deal with situations beyond their control.

Gives a whole new context to those circus clowns, eh?  Or rodeo clowns?  Interesting how circuses were usually made up of travelling "freaks" ostracized by society...  Were they subversively making fun of the upper classes in plain sight of their audiences?

Regardless, the ruff has experienced a resurgence in the fashion world this last couple of years...  It seems that it's one of those "over the top" accessories that you really have to be wearing something chic with to pull off.  Some of them are made of feathers or polar fleece--not traditional materials to be sure!  But when you change the context, the purpose and effect of a garment piece can change as well.  And if they're going to change, why not change the materials?

That's what I've done with the ruffs that I've created over the last couple of months--selected non-traditional materials that have resulted in ruffs that have a very different feel and look than ruffs have traditionally held.  It changes the context of how we view these accessory pieces.  they may be beautiful pieces to own and have and display but not to wear.  Some may be perfect to use with that Venetian Masquerade costume, or even with a Carnivale celebration.  Some may be just what is needed to spice up that Steampunk cosplay outfit by putting it just enough "out there" to make it seem aristocratically extreme and quirky.  Some may simply be used in costume situations for performances, regardless of whether they are worn by acrobats or clown or ring masters.

It all depends on context. 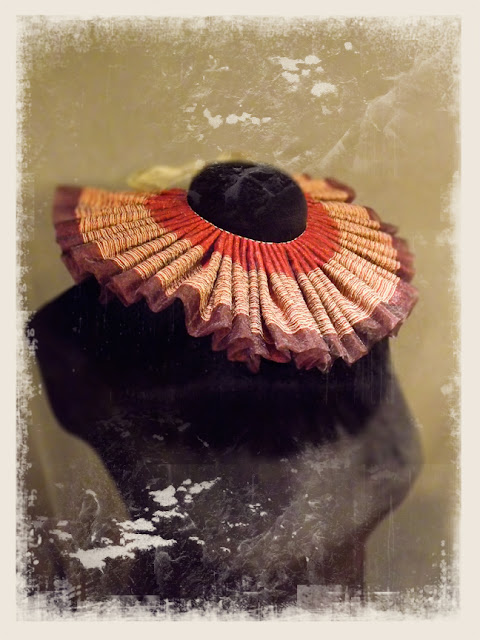 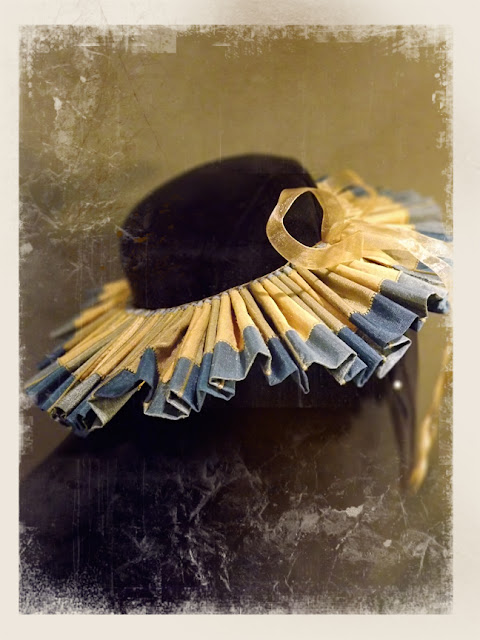 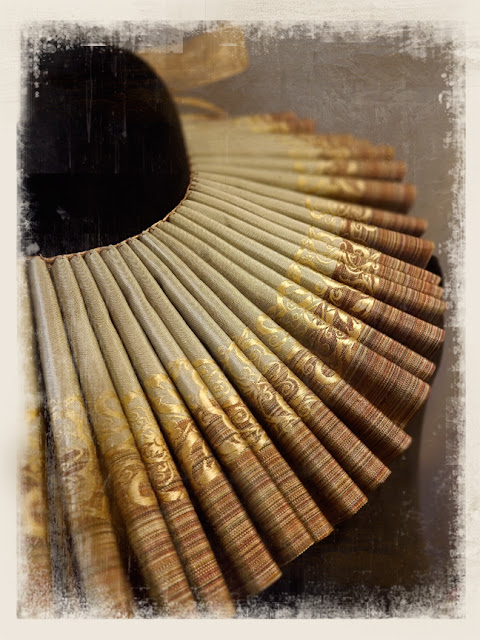