'tis the Season to Turn Fear Inside Out 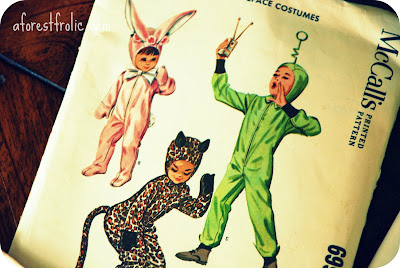 Halloween is just around the corner--a little over two months away.  The pattern companies are sending their kiosks to our favorite fabric stores, and yards of sparkly spiderweb fabric is piling up in seasonal displays.  Moms across the US are pondering how they're going to make their little tot's costumes without breaking the bank, and savvy web-surfers are already collecting options for alternative looks that are completely out of the norm.

Halloween is a DIYers dream holiday.  Not only is making one's own costume an adventure, but creating the accoutrements and accessories to make it a complete package is a golden opportunity for stretching one's wings and exploring new things.  There are home decorating alternatives galore, and those with real electronic skill are beginning to ponder what wizardry they can create around their own abodes. 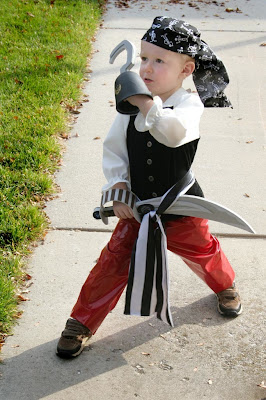 Halloween is also a great time to experiment with those cooking concoctions of the kitchen like the inner mad scientists we've always wanted to be.  Dry ice?  Crackle Pop candy?  Food coloring?  Baking Soda?  Throw them all in for the exploding sugar volcano sure to rock the neighborhood!  Black cat cookies?  Zombie bars?  Hearts of watermelon?  It's time to play in a way you don't get to usually.  Perhaps those Christmas favorites can get contorted and twisted to become Halloween favorites as well.  Sugar Plum Faeries were never so wicked!

In my neighborhood, we go through several bags of candy as our neighbors play host to kids that seem to crawl out of the woodwork to visit our street and Trick or Treat.  My partner sets up a handmade "It's the Great Pumpkin, Charlie Brown!" Peanuts scene in our front yard that he's assembled out of painted plywood.  Each of the figures is in their halloween garb, and stands about 3' tall...  We used to light them, but were told that we couldn't because of city regulations.

But it's interesting how the Halloween holiday has put an emphasis on community where Christmas is about family.  All of the kids that visit our front door in hopes of scoring their next sugar high trust the adults in their world to not hurt them.  Their parents linger nearby, sure, and they may go get their candy x-rayed for safety, but under all of that it's really an exercise in trust.  For a holiday like this to work, parents put themselves on the line and trust their communities to help provide a wonderful experience for the local children.  It takes a village to raise a child?  Well, on Halloween it does.  Ironically, it's the antithesis of fear and fright that Halloween ultimately celebrates.  No scary monsters can douse that spirit of optimism. 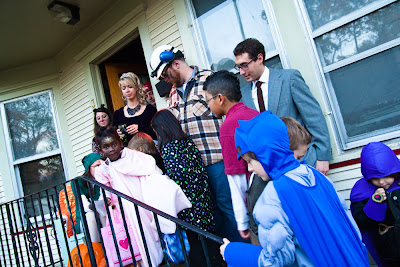 Maybe that's why all the activity brings out our adult neighbors to banter and laugh with each other.  I think we're closer as a community on that night than we are normally.  And that's good.  The two guys directly across the street have been here as long as we have and they know all the kids and their parents.  The Latino family next door to them is incredibly friendly.  The divorced single dad living next to us has always been nice, even when his girlfriend's convertible was stolen from right in front of his house the first day he moved in...  The older lady on the other side of us is charming, and the Marine and his wife who live behind us are the typical young married couple in their first home--socializing and hosting parties for their friends into the wee hours of the night...  But we have a nice group of neighbors that look out for one another.  And we all give out candy to the kids that appear from nowhere with their parents in tow, or arrange to provide candy to each other so they can give it out in our stead.

Maybe Halloween is about the costumes and cooking and decorating on one hand, but it's also about community on the other.  Dressing up and having fun is a way of sharing that uplifting feeling with those that live nearby you.  It's a great tool to step away from the computer or TV and rise to the occasion.

I encourage you to explore a DIY Halloween project this year, and use it as a bridge to express community solidarity and togetherness.  Live Life with Relish while you can.