Have you ever noticed how women wearing a ruff look artsy and non-traditional?  It's a look that's blatantly retro--I mean really retro--that sets a person apart from the rest of the crowd.  It's origins can be traced all the way back to before the Elizabethan period.  It's essentially descended from a shirt collar that's out of control, and mankind has adapted it and adjusted it for their own purposes ever since. 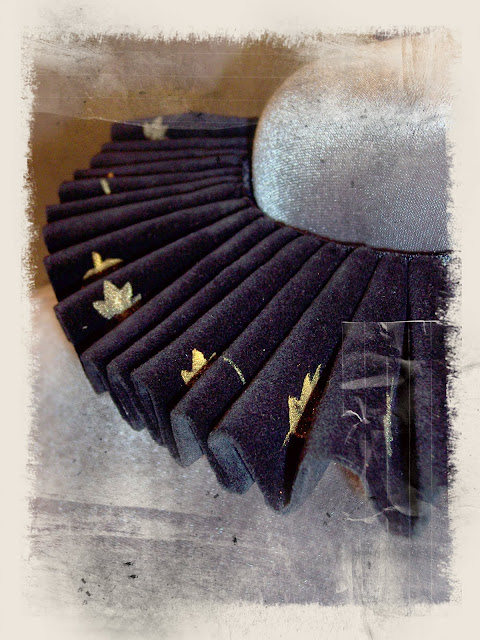 Today, it's a curiosity that recalls clowns and mimes and artistic fashion attire.  No lady wears one on an every day basis, and they're certainly not worn in everyday masculine attire.  Instead, today's shirts and blouses have their own collars, sometimes wrapped up nicely with a tie. 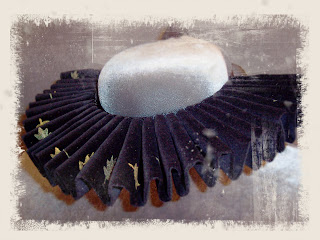 Ruffs can be cumbersome and distracting in the worst of times, but elegantly stylish in the best.    Wearing a ruff says something about the wearer--they're certainly making a statement!  It tends to dictate the rest of the garment, and it's hard to avoid it being the centerpiece of the outfit.  Traditional ruffs for costuming purposes are almost always white organza because the stiff quality of the fabric lends itself to maintaining soft folds and curves yet supporting itself so it doesn't droop.  Depending on the length of the hair, it's almost always necessary for a lady to put her hair up in a bun to avoid it crushing the ruff at the back of her neck. 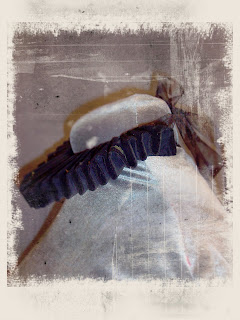 Well, not anymore.  Welcome the new Half-Ruff.  It doesn't have a full circumference around the neck--it only goes three quarters of the way around, allowing for longer hair to fall down the back of the neck and not crush the ruff.  It's black velveteen--a sturdy fabric but not white.  It's folded up and mounted on a 1" grosgrain ribbon that is then attached to an organdy ribbon so it can be easily tied around the back of the neck. 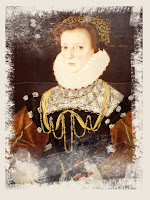 I like this piece.  I painted golden and olive green metallic leaves along the velveteen to give it some hidden character.  The leaves peek out when folds of the ruff are played with.  It's  a smaller circumference than a traditional ruff, but not so small that it looks like a neo-Victorian piece.  Elegant and simple, it's definitely an eye catcher!

I haven't put it in my Etsy store yet.  I thought I'd share it with all of you first.  I'm really excited about making accessories like this for the more dramatically inclined and have been doing more research regarding vintage accessories that I can "liven up" in a non-traditional sense.

But next time I will first post about some men's double breasted vests (woohoo!) that I've made with style and flair.  In upcoming posts, I'll also share with you my new art doll projects! Until next time, Live Life with Relish!