Experimenting with Some Men's Vests

I have a vest in my wardrobe that was manufactured by Structure over 10 years ago.  I love it--it's got a nice texture, it's sturdy, it has a great lapel...  It's "period" looking in style, and I've received many complements about it.  It's constructed nicely, albeit in a contemporary fashion.  It fits me, and I enjoy wearing it.

So I wanted to duplicate it using my own fabric choices, and have a resulting pattern that I could manipulate and adjust to whatever my desires might be in the future.  I created a pattern using the vest, and from there I went creatively out of my mind...  First, I made a new vest using  my new pattern, and got all the way to the end of the construction and realized I had put the buttonholes on the wrong side--I had made the overlap for a woman not a man.  Talk. About. Frustrating.  It was a big "D'oh!" moment, to quote Homer Simpson...

My second iteration of the vest was a bit more successful, having learned my lesson.  But I manipulated the pattern to create a double-breasted version with a different kind of collar.  I used the same fabric, and ended up with a formal looking vest that I was quite proud of.  I made it a "real" double breasted vest, with two rows of functional buttonholes instead of the more usual single row.

But I didn't stop--I started making even more!!  For my third iteration of the pattern, I really played with the collar shape by adding "dags" in it, and added a swallowtail in the back for a funky, Steampunk Circus kind of feel.  I also made it completely of satin so it had a shiney, slick quality that reflected the light.  Not a garment that can be worn everyday, this really had a flavor of it's own.  (I'll have a picture of this later,  as soon as I get the buttons on it.) 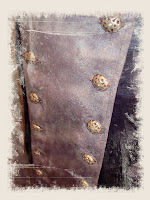 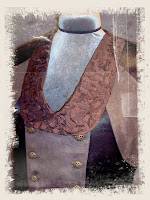 Finally, for my fourth iteration, I decided the pattern should be chopped up even further, so the vest had multiple fabrics.  This one turned out to be quite Steampunk inspired--the brown and caramel colors, the sueded nature of some of the fibers contrasting with the changeable satin sheen, and the metal filigree buttons.  Again, I added a swallowtail in the back, making this firmly a Steampunk piece that is more costume than normal every day attire. 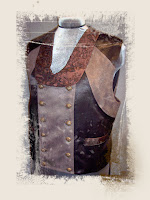 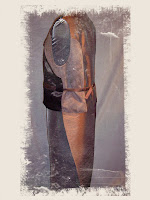 All of this from a single vest that I already had in my own closet.  And there's much more to come from this pattern!  I'm going to grade downward and upward, making the pattern bigger and smaller for a variety of sizes.  And my fabric stock is still quite large--I'll be piecing and shifting different shapes and sizes using this pattern for a while, I think!

When adapting and manipulating patterns for your own purposes, it's fun to think outside the box!  After all, if you're going to take the time to do it, and it's going to cost you the same (if not more) as buying a pre-made garment, why not mix it up and do something different and unusual?

Life is too short to dress boring.  Live Life with Relish!