I subscribe to a lot of blogs, but one came around this morning called "Is Your Creativity an Act of Protest?" over at Refashionology, and it caught my attention...  It turned out it was a commentary on another blog post over at BurdaStyle.com called "Sewing as Protest", written by a guy named Peter Lappin of Male Pattern Boldness, yet another blog!  (I seem to be blog-dropping today, aren't I?)

Anyway, the idea of Peter's original post on BurdaStyle.com is that many sewers do what they do because of the horrible exploitation, pollution, and sensationalism that is involved in manufactured clothing.

And wow, that hit the nail on the head for me.  I worry about those people that are overworked and underpaid over there across the ocean.  I know what it's like to be in that situation--practically all of us do.  I don't understand why it's all necessary. I worry that business profits are increasing at the cost of our humanity and how we treat others. It disturbs me that we're using business as an excuse for unethical actions.  If I can, I'll opt for a local and small business solution.

I also see what we do to our environment, and how we are sometimes ignorant of what goes into making the supplies we use for our crafting and sewing.  I've heard that growing cotton uses more pesticides than any other crop in the world--responsible for 40% of all the pesticides used worldwide.  That really worries me.  Is my $2 broadcloth at Wal-Mart worth that? 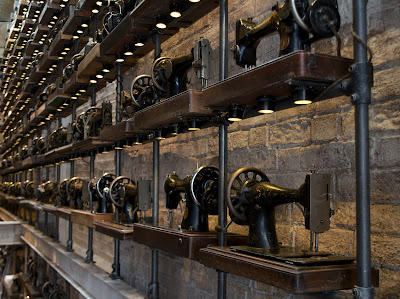 I understand that making things on one's own is sometimes a lot more expensive than simply relying upon a storefront to provide access to whatever you need.  It's hard to not shop at some stores when they offer so much variety available so cheaply.  But personally, I am beginning to question why our clothing is so cheap...  When something is too inexpensive, I wonder why.  And I'm not so apt to jump on the cheap deals anymore, because I'm too busy contemplating who is the beneficiary of that great price...

I think there is a huge movement that is growing rapidly toward embracing "non-manufactured fashion" as the new stylish trend.  The concept of pride in one's attire through a more personal involvement is starting to rise.  Whether that's paying more attention to it's fiber content, choosing to recycle or up-cycle part of one's attire, making your clothing yourself, or purchasing it from an individual artisan, or selecting from what's available in a small scale endeavor,  there's a lot of people that are starting to make conscious efforts to turn away from the confidence-crushing fashion machine.

Many now consider the fashion industry to be overtly reliant upon built-in-obsolescence, and the cycle of fashion has now swallowed it's own tail.  It's now trendy to reuse the old breathing into it new life...  The consumer is suffering from trend fatigue and can't keep up.  So they've created their own cool trends and styles.

And this isn't just in clothing or crafts.  It's in music.  And book publishing.  The rise of the DIY movement is starting to influence a public perception, and our current politics and business models are simply encouraging the backlash of awareness.  People are learning to do more with less, and still not go without.  Conservers are the new consumers.

I think it's important to do a little bit--what you feel comfortable with--every day.  To make something beautiful to counteract the horrible atrocities that are so common in our world.   I want to give something back to the world that makes someone smile--something from my own hands and heart and head.  And if making something pretty that someone loves is what I can do to contradict the level of greed and exploitation, the lack of confidence in one's appearance, and the general feeling of "being used", then I'll gladly keep doing what I'm doing.

And Live Life with Relish.