In my last post, I discussed a Steampunk convention I had attended and included a bunch of portraits that a photographer had taken of some of the other attendees. In the comments, Pattie who writes her Joy of Nesting blog, mentioned that she felt Steampunk was a great medium for Altered artists.

She didn't mean artists who are "altered" in some way. I guess we're all a bit wacky in the head sometimes, but I don't think that was her point. And I'm sure she was referring to body modification either.

No, her point was making art from something that already exists, whether it be from a pre-existing piece, or pre-existing materials, recycling, upcycling, or simply being inspired to retranslate something. Steampunk is like that, in a way. It uses the inspiration of the Victorian era and puts a different spin on it, making it something very different. It becomes "neo-Victorian". It becomes it's own entity.

This really made me start thinking. I went on a quest to discover what "Altered Art" was.

From altered-art.net-- ...it involves altering or combining existing works of art to produce new pieces of artwork. However, most people would understand this expression to mean the transformation or 'alteration' of ordinary, everyday objects into artistic pieces using, for example, rubber stamps, fabric, paper, paint and fibres.

From fragileindustries.com-- Altered Art is a broad term that encompasses many styles and genres of art. At its most basic, it gives a new artistic life to old and/or used mundane, utilitarian item through the application of techniques and combinations, some recognized as standard artistic methods, some not. The result may serve both a functional purpose as well as a creative artistic piece. [Note: There are 3 additional pages of definitions for various media.]

From Alteredgirl.blogspot.com--Altered Art is a broad term that encompasses many styles and genres of art. At it’s most basic it means using creative techniques and tools to alter and change an item (often found items or items whose obvious use might not be artistic in nature) to give it a new purpose and artistic meaning. Some types of art included in the altered art genre are collage, mixed media, assemblage, decoupage, and photomontage.

Hm. Seems there's a real thrust on changing something from an everyday function and form into something that has a meaning beyond it's original intent. 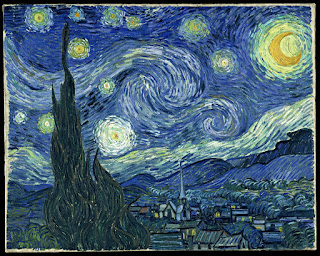 While it was a bit disappointing in one sense to realize I may not be an "Altered Art Artist" per se, I took a deep breath and realized that's okay--I don't take the everyday/mundane/ordinary item and elevate it through artistic processes to result in something meaningful. But I still use that thought process in my work as a costumer. And I realized that's why I connected with Pattie's comments in such a strong way. I take inspirational material and translate it into something beyond which it was initially intended... 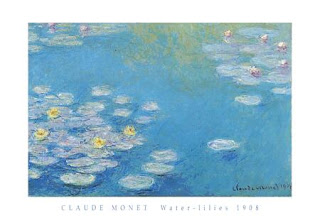 A few years ago, I did a production of William Shakespeare's A Midsummer Night's Dream. The director thought it would be cool to make the entire production a dream. Literally. So everyone was in pajamas. Literally. Talk about setting parameters--I needed to do Oberon, Titania, Puck, Helena and Hermia, the Mechanicals... All In Pajamas!!! His concept was that the entire play was a little boy's dream, and in the end we discover the little boy is actually Puck sharing his dream with the audience.

Did I mention they had to be pajamas? 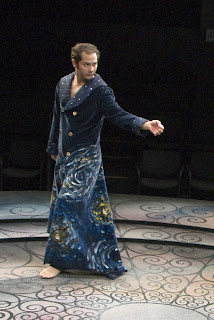 Oberon would be in a masculine double-breasted robe with quilted lapel accented with rhinestones. It would be of deep navy velour, hand painted with the swirls of Van Gogh's abstract technique wafting over the dark surface of the nighttime garment. Masculine and dark, his color pallet was of the painting--blues, dark greens, soft whites and golden ambers. Built from the ground up and drafting the pattern to the actor's measurements ensured a good fit. It was unlined because it was heavy velour and quite warm. This was the first time I ever used heat-set rhinestones, and I applied them copiously to the seamlines of the collar and at the center of each star! 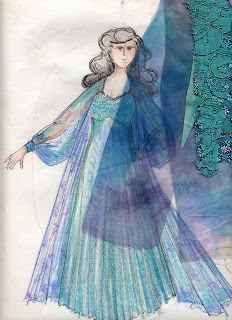 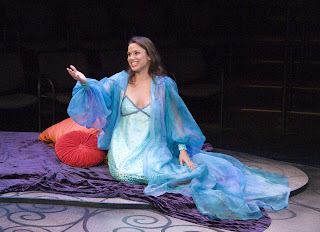 Titania, on the other hand, was the light and feminine element of the faerie world. The director felt soft watery flowers would be in keeping for her, so her color palette was cool aquas, teals, and soft lavenders. Instead of heavy velour, I purchased several yards of silk organza, hand dyed it with Dye-na-Flow fabric dyes on a sheet of plastic, and found some sparkly teal shear curtain fabric to constructed a pseudo-negligee nightgown. Flowing and ethereal, she was the antithesis of Oberon's heavy weight. She wafted across the stage as the organza caught the air. 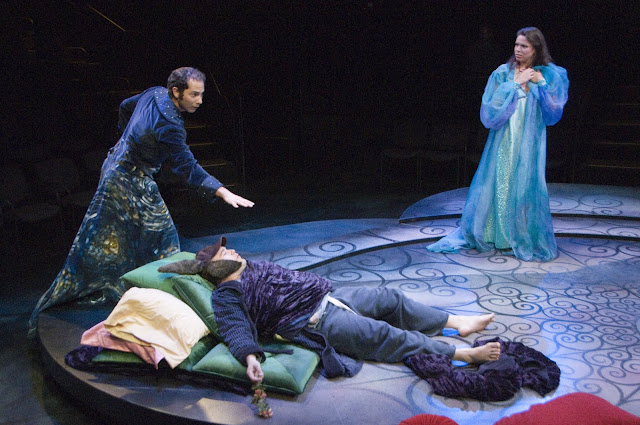 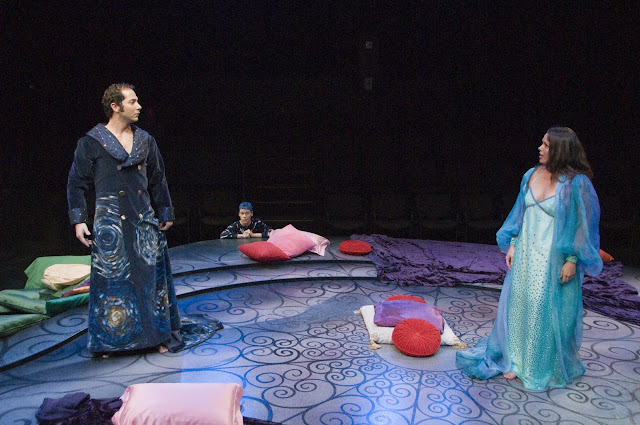 The rest of the cast was, of course, in various kinds of night attire: footsies, underwear of various periods, sweatpants and tops, shifts, bathrobes, nightcaps, etc. Of course, things weren't exactly as planned--lapel shapes changed, trim was added in various places, and other minor details shifted, but overall the garments stayed pretty much the same throughout the process.

My job as a costume designer was sometimes to take the emotional essence of works of art, use the stylistic aspects of those pieces, and "assign" them to various character attire. All in an effort to translate some of those same emotional responses to the characters. Literally lifting a classic painting is somewhat rare, but "borrowing" design elements of color, line, shape, form, and texture is quite common.

Much like Steampunk, I was using inspiration to "alter" garments to my own needs, creating a completely new entity that may hearken back to the original, but is clearly not the original. It may be a stretch to call clothing "everyday or mundane", but from a certain perspective it is. Pattie's garments on her blog don't directly lift inspiration from well known classic paintings, but they are clearly not the "original" garments. And honestly, what could be more ordinary than our clothing? And what artistic pieces they become! 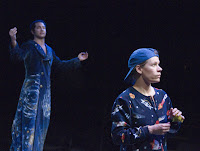 I like doing this so much more than recreating realistic historical garments. It is so much more fun to put your own stamp on things. And regardless of the difficulty of "smashing" Van Gogh and Monet and sleepwear together, it is actually much much easier when you're working within parameters for your creativity... It becomes much clearer what "works" and what "doesn't work". The more limitations you put on your creativity, the more they become "delimitations" and are actually quite freeing.

I think it would be quite exciting, regardless of your medium, to use a classic piece of art as an inspirational tool. Over at Art Bead Scene, they're using the colors and textures of a Victorian painting as inspiration for making jewelry! 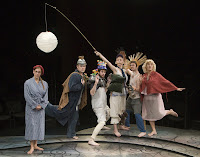 Maybe I'm not an "Altered Art Artist". Maybe I am. But I can see that part of what a costume designer does is indeed altered art in a sense. It all depends on how much that part of the process is emphasized and what the resulting piece's artistic function is going to be. I'm enjoying exploring what that means. And I plan on using overt inspiration a lot more in my wearable art pieces.

And now that I'm know a little bit more about it, I think I'm going to look at a LOT more altered art!! Any ideas where I should look it up?? I'd love some advice! Sight seeing and inspirational internet tours are my favorite! : )