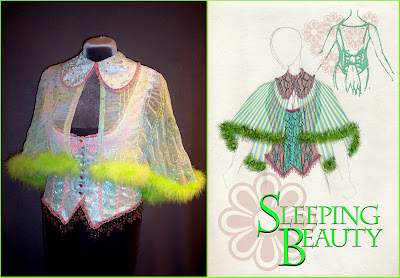 Another installment in my Fairy Tales project is done!  Whew!

Using the same vest pattern that I used for Little Red Riding Hood, I selected different fabrics and trim to come up with a completely different look.  Pastel blues and greens and pinks are accented with rose petal fringe and flower trim.  Lace and marabou feathers enhance the "bedtime" feel, while shiny sequins give it some extra pop!

I like the statement that Sleeping Beauty makes here...  I think it's interesting that the Disney movie version of the story had our heroine zonked out in full day dress attire.  I didn't think that made much sense.  I mean, who sleeps forever waiting for true love's kiss in a ball gown?  Yeah, I know--I'm being selective in what's "realistic" in the story...  It's a fairy tale after all, and who would find themselves in that situation "realistically" anyway? 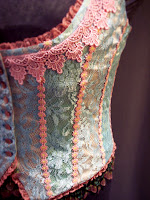 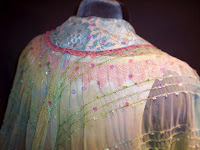 Regardless, it seemed to me that a proper princess would have some attire that was more appropriate to the occasion.  I'm not saying negligee is appropriate, but if you're going to draw the attentions of a Prince into kissing you, breaking an evil curse, and you can't say a word because you're asleep, wouldn't you want to use every tool you've got to inspire him?  I mean, hey, it worked for Prince William and Katherine Middleton.  Seeing her prancing around in a see-through dress seemed to have an affect on him... 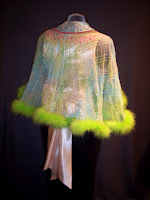 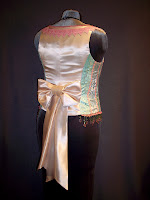 But then, on the flip side, Sleeping Beauty is a fairy tale at heart.  A "come hither" bedroom seductress hardly seemed to fit the story, so the negligee I designed is a little more innocent and "cute".  Probably pushing the boundaries of feasibility, this garment is more of a comment on the situational context of the story rather than a realistic piece of attire the character would wear.

All of the pieces in the Fairy Tale series are more commentary on the tales rather than realistic attire for the characters.  Goldilocks, for example, if you think about it, is actually a thug.  She's trespassing, stealing food, using their stuff, and then runs away when the owners come home!  She gets off scott free!  Hardly a lesson in proper behavior.  So I'm designing a vest for her that uses vinyl, and is a bit too cute.  As in Goldilocks likes to appear as a sweet little girl, but is really quite hard-edged underneath her veneer of appearance.  My version of Goldilocks is also the most wearable of the garments in the series--the most easily manufactured, and worn over a simple t-shirt on the dress form.  Next time, I'll post a preview pic.  I've got her all cut out, and it's ready to get assembled!

I've also managed to move forward on my Snow White vest.  But this one, I'm calling "Snow Noir" as it is entirely black...  Again, thank Disney for manipulating what we see in our heads when we think of the fairy tale--hardly anyone can think of any other vision aside from their version of Snow White and her seven dwarves...  So my vest is a statement on the costume we all think of when we think of Snow White.  But in all black.  Why?  Because I find it interesting that a character with such a pale complexion, rose red lips, and apparently the "fairest of them all" would consider wearing such an odd combination of colors!!  How is a bright yellow skirt and non-matching electric blue top flattering??  Show off that milky-pale skin!  Bring out the color in those lips and eyes!  Housework shmousework--you're a woman, Snow!!  Own it!

Anyway, more on Goldilocks and Snow White later.  I gotta get back to my studio!  Until next time, Live Life with Relish!