Back to the Studio and an Art Opening

So my time at La Jolla Playhouse's costume shop has concluded, and Little Miss Sunshine is open.  I'm home now, working on my last contracted piece: a 1930's fur coat for Cygnet's production of Cabaret.  Shirley Pierson is designing it, and she's hired me to complete it for her. I have to have it done by Wednesday, the 9th.  So I'll be in fur-land for a while. 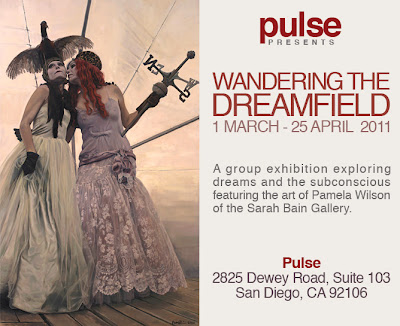 But last night I joined an artist friend of mine, Joan Mathison, in going to a gallery opening of a San Diego Fine Arts Society show at the Pulse Gallery in Liberty Station, an up-and-coming arts district in the Point Loma area of San Diego.  Apparently the event is known as "Friday Night Liberty", and I had a blast.

I've known Joan for almost 20 years, and she's been working on her artistic expressions for all that time.  She has a studio that I've visited in the past, and we've been able to have some wonderful art discussions while she's been working with me in the shop at La Jolla Playhouse.  She's an incredibly talented seamstress with skills I outright envy, and her artwork is a wonder to behold.  She invited me to the opening because there was an artist that she admired in the show, along with another artist friend of hers in the same show, so she was quite excited to see it.  We met a bunch of her artist friends there.

The show was called "Wandering the Dreamfield".  And it was incredibly beautiful.  I've not been to a lot of gallery exhibitions, so I'm no judge of what's critically worthy, but I know what I like, and I liked this show.  The assembled pieces really worked very well together, and the skill and artistic expression on display was quite stupefying.  I got to meet one of the artists, Aron Wiesenfeld (Joan's friend), and he was humble, friendly, and quite the regular guy.  His pieces on display were haunting and romantic, without being too surrealistic or heady.  He has a lot of intricate detail, but it comes across with simplicity and ease.  One could simply stand and stare at his stuff for hours and just absorb it.

Joan got to have a lengthy conversation with another of the featured artists, Pamela Wilson (whose work can be seen in the Sarah Bain Gallery and is in the image above), whose pieces were portraits of characters in dreamy states that were fraught with what I felt were deeper significance.  They look like photographs from a distance, but up close you can see the brush strokes, and see how she's directing the viewers attention with her careful detail around the face but selectively deleting it as she approaches the edges of her canvases.  It's very much in the style of the old masters, and the glassy varnish she applies over the top creates a looking glass effect that draws the viewer in.  Her skill and technique are daunting to behold.  A must see.

Joan and I ate dinner and wandered into some of the other galleries in the area as we waited for her friends.  We saw the Bravo School of Art, the Visions Art Museum featuring art quilts, the San Diego Watercolor Society,  The Martha Pace Swift Gallery, and several other artist studios that were open on the same night for the same event.  It really was an incredibly inspiring evening.


And I feel like I just dipped my toe in a pool that is a whole new world for me...  I'm excited and thrilled by what I saw, and I stepped away intimidated but empowered.  I'm glad Joan was there with me, because going out on my own wouldn't have been nearly so interesting.  I was excited by her excitement, and bolstered in my attempts to redefine my own sense of self toward a more artistic career path.  I'm really looking forward to getting some time to work on my own stuff for a while, and I'm optimistic in a way I wasn't before.  I can see the value in having a good art friend to share thoughts with.


I plan on going to see work in an upcoming show this next weekend, along with the work of her fellow artists who also have studios in the same building Joan is in.  And Joan and I have plans to go to another gallery this week--North Park Art Produce.  So I'll let you know how things go!


Until then, Live Life with Relish!