Today, I had a day off work so I decided to dive into the next step in my Fairy Tale Series of women's vests.  I modified what I thought was going to be my design, simplifying it in the process, and I've come up with something that I think will really be interesting.

I then took a photo of the selected pieces and drew a sketch in photoshop of what I'm hoping it will look like in the end. 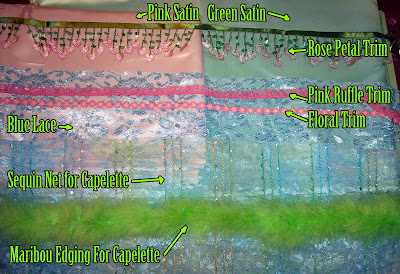 I am going for a negligee look that is sweet and innocent and girly.  I thought that I might try for a 1970's vibe but decided against it as I assembled my materials.  I had selected some other fabrics that I had intended on using in a large peignoir for her, but then realized it was looking less and less like a vest so I cut it.  I have the fabric for some other project to use in the future, so it won't be lost forever!

Instead, I decided to "bring in the pink" and go for a more precious look than the more mature and womanly approach I was considering.  I will save that for another fairy tale icon (maybe Snow White, all in black with a keyhole vest opening?  Hmmm...).

Above, you can see the fabrics that I've collected for the project, as well as the trims I've found that I'm going to use.  I dyed the pink bits with scarlet RIT dye...  I think they're going to work well.  The pink satin is not as intensely pink as it appears in the photograph--it's just a blush, really.  More of a beige in a way.  But I think the trim will bring out the redness of it.

The marabou is my nod to negligee--soft and fluffy!  I spelled it like "caribou" in the photo--oh, well!  It's a good thing I'm not teaching anymore!  LOL! 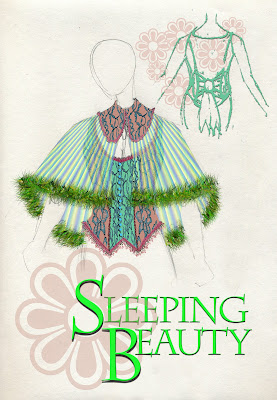 The picture to the right is another attempt at expanding my Photoshop skills... I'm learning how to get what I want, even though it's taking me quite a while... I learned about saving "selections" today!  I enjoy using Photoshop, but I'm suspecting that I can get a lot of what I want using Adobe Illustrator as well... We'll see.  Another day of exploring in the future perhaps.


But first I must sew!  I am using the same pattern that I used for the previous Fairy Tale vest I assembled--Little Red.

You can find more information about the whole project in many of the posts with labels of Little Red and Vests.  I'm hoping to assemble an entire series for exhibition soon.  The whole is a comment on what makes our attire "costume" versus "fashion", and where do we draw the line when we wear what we wear?  Each icon gets progressively less and less wearable from store-purchased attire to completely impractical fabrics, shape, and construction.  We'll see how it goes.

Sleeping Beauty is another step toward achieving my resolution of creating an art exhibition!