I heard an interesting podcast the other day, and I've lost where I heard it so I can't give credit where credit is due...  It presented an interesting concept that has made me think about things lately...

I've heard that, apparently, it's been proven that receiving a text from someone actually creates a chemical "high" in teenagers.  They get a little boost of something that makes them feel good.  It's a tiny little adrenalin rush that results in a general feeling of "good".  I have no idea where I heard that, but it seems logical.  It's easy to see why texting is so popular in younger crowds.  I've also heard similar things about using the computer, posting on blogs, receiving commentary, and getting comments on Facebook.

I can see how these things can be so addictive.  There's something quite pleasing when one is listened to, validated, or somehow "engaged"...  I'm sure there's a hormonal/chemical fix that one achieves when eliciting a response from someone to something you've said.  Makes sense to me. 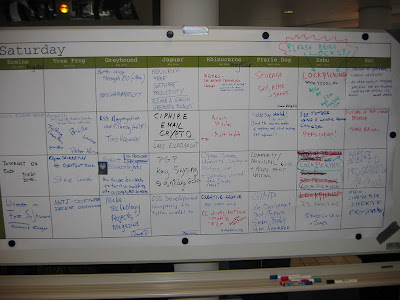 By extension, it seems logical that there have also been studies that have proven that self-help books provide an artificial sense of accomplishment in lieu of actually following through on the advice.  The podcast I listened to pointed out that the entire self-help book industry is based on this.   When one reads a book or listens to advice about how to "fix something", one feels proactive and a sense of new awareness sets in.  That's pretty powerful.  Feeling that positivity and optimism is a great thing.

But the podcast went on to say that too often we stop there.  We substitute the feeling of positivity for the actually "following through" on the advice.  We don't actually do anything.  Instead we feel satisfied by the rush provided by the potential to do something.   And we don't actually commit to it.  Our brain gets tricked...

This made me step back a bit and realize that there are a lot of things that I've been doing that create a substitute feeling of completion.  I sometimes go out and turn everything on in my studio, and that makes me feel good--like I've accomplished something in preparing to work--but I don't actually end up doing much work.  Or I spend time reading different advice blogs about what I should be doing but I don't actually act on any of the advice, and instead I go to the links suggested and spend time browsing.  Many a time I've listened to podcasts and feel like I'm doing work by adding to my store of awareness or knowledge or inspiration, but in reality I've not actually taken the next step and actualized anything as a result.

The rush I get from "planning" the work or being inspired or visiting a website replaces that actual feeling of satisfaction I would get from accomplishing an end result.  I don't actually do anything.  I just think about it.  I ride the chemical high I get from a false sense of completion.  I'm perpetually planning.

This has been incredibly enlightening to me. I find myself listening to a lot of things and buying lots of books and storing lots of fabric but not actually creating a physical product.  I plan, and rationalize that I'm still moving forward.

I recognize a lot of addictive behavior, where I am continually creating an artificial sense of accomplishment, striving for the feelings of confidence and satisfaction. 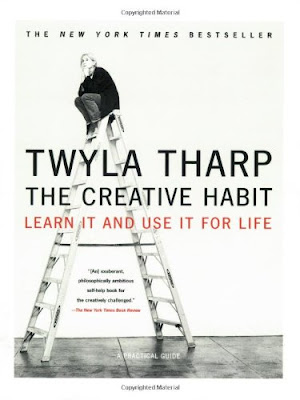 Awareness isn't an actual end result... It's rather like drawing a design of a beautiful dress and never actually making it.  Or only doing part of an outfit before losing interest...  How many of us have boxes of fabric but lack the motivation to actually do anything with it?  It's almost like the thrill of buying it and contemplating what we can do with it actually replace the real end product of creation.  Half finished paintings...  Books with no endings...

I find that I have lots of ideas and plans, but find it incredibly hard to get my butt into the studio to actually do the work...

Twyla Tharp, the famous choreographer, said that an artist has to be incredibly disciplined and supremely structured in their lives.  That only through forced self-regulation could an artist actually create.

I'm beginning to see why.

And I'm wondering how artists do it... I'm wondering how they force themselves away from their addictive "chemical highs" of TV, computer, blogs, podcasts, tweets, texts, and other "things" to accomplish their work.  I suppose it's rather like choosing to physically exercise and work out: is it a lifestyle choice?

Perhaps I should look at making art like I would going to the gym?  Is there much of a difference, really, in the end?  If a person recognizes the effort it takes to incorporate a regular physical routine into their lives, what is so different about creating a structured art time in their lives?  Buying all the exercise equipment in the world, and workout clothes doesn't get you any closer to the self-discipline of the gym.