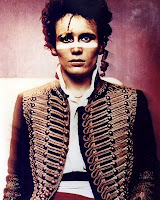 I've been looking at my Google Analytics for this blog lately, and have learned that the page most folks are going to seems to be titled "Hussar Jacket Project".  Now, I'm not at all sure why, but I've actually received a couple emails with questions regarding how it was constructed and if there are any patterns available.

Looking back, I didn't really outline what I was doing very well, and it seems to me that a useful thing to do would be to recap what the project was and why I made the choices that I did.  In a nutshell, how I put the whole thing together... 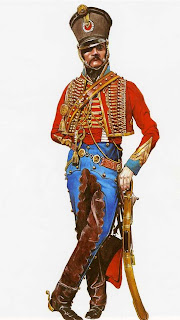 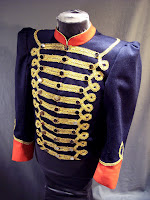 I was hired by a friend of mine to make a jacket based on an Adam Ant look for some charity work he was doing.  He provided me some pictures of what he was looking for, and I went and did some more online research.  I looked up Hussar jackets, and then time period in which they originated, and from there moved on to military costumes from the same era.  It wasn't hard to find a lot of pictures that would be helpful, and a lot of images that just weren't helpful at all...  I collected a bunch, printed them out, and then had a discussion with my client about what he was specifically looking for.

Turns out, he was looking for something less Adam Ant-esque and more military looking.  He didn't want to look like the rock star, he wanted a look that was reminiscent of the time period the coat is from.  That made it a lot easier.

From there, I took his measurements, and tried to find a source for a pattern.  Nada.  Nothin' out there...  I found forums where others were trying to do the same thing, and read the replies...  I didn't find anything that I felt would be helpful.

So I started looking through my own library of resources.  I had one book, Men's Garments 1830-1900: A Guide to Pattern Cutting and Tailoring by R.I. Davis, that I thought might be helpful, but even it didn't have specifically what I was looking for.  I ended up drafting up some of a coat, modifying it for my own needs, and winging the rest...  I developed a pattern based on my friend's measurements that didn't end up fitting very well...

So I did major major modifications that probably, in hindsight, have been better executed.  But it had a "fiddle back" and tails that folded in on themselves that hung down from the waist, and sleeves that had cuffs of contrasting fabric, so that was good enough for me.  The one thing that worried me was applying all the trim...  I wasn't looking forward to that.

The trim I selected left a bit to be desired...  It was metallic upholstery gimp instead of soutache...  Soutache would have taken far too long, and I didn't have the technology to wrap it in curls without doing it by hand--an excruciating process that would have taken days for me...  So I opted for something a little less realistic and more practical.  It still took a long long time to apply, but I could do it by machine which saved a lot of time...

I ordered all the silver buttons through Eli Yawitz in St. Louis, where I was able to get them in bulk.  I think they're shinier than my client desired, but they worked, and wow--there were a LOT of buttons!!

In the end, I created a look that was functional and figure flattering, and it did the job.  The result was probably more Michael Jackson that my client wanted, but I plan on going back with another row of stitching over the top of the gimp braid, so it will end up toning it down a bit... It will look more military and a bit less show business like. 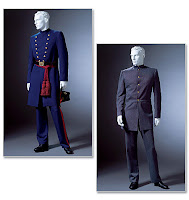 Since then, I found a pattern that is easily adaptable to a Hussar coat... McCall's #M745: Mens Civil War Patterns.  The jacket has a skirt, but it can easily be modified for a Hussar look--just make sure you've done your historical research to find out how they look and work.  The finished coat has a fiddle back, is lined, has no shoulder pads, and when the skirt is simply removed and not constructed it creates a bolero look that is great as well as reminiscent of a lot of civil war uniforms as well.  The pattern is cut for contemporary bodies, and it's not that hard to construct.  Trim can be added on as desired. 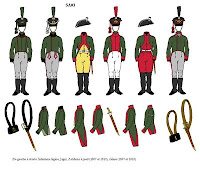 One young man from Canada recently emailed me trying to find a pattern that's similar to Freddy Mercury's yellow-strapped coat that he wore famously as Queen's frontman.  The McCall's pattern is easily modified to create just that look.  The straps with piping can be created from scratch and applied to the pattern, and the sleeves can be created by either chopping off the pattern and reattaching as a separate cuff, or simply adding trim around the bottom of the sleeve to look like a cuff.  It's an easy build.

So for all those folks out there with Hussar Jacket questions, please feel free to email me at relishedartistry@gmail.com and I'll be glad to help you if I can...  I'm not sure if this is going to be useful or not, but it's worth a shot!