I was listening to a podcast that I regularly subscribe to--Art and Story.  It's a comics illustration podcast that I enjoy a lot, and I listen to it as I work in my studio.  The guys are funny, they discuss interesting topics, and I always glean something from them that I hadn't thought about.  Even though they are in a very different field, I am continuously surprised by it's relevance to my own. 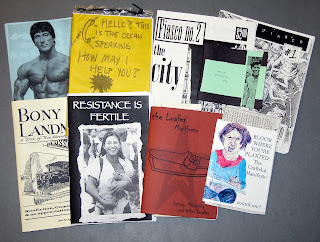 So I'm listening to this episode on Zines.  What's a Zine?  Well, to quote Wikipedia:

A zine (an abbreviation of the word fanzine, or magazine; pronounced /ˈziːn/ "zeen") is most commonly a small circulation publication of original or appropriated texts and images. More broadly, the term encompasses any self-published work of minority interest usually reproduced via photocopier on a variety of colored paper stock.

I've not come across a lot of zines in my experience, but the ones that come instantly to mind are the ones from the 1960's and 70's, published and circulated in counter-culture circles.  That was way before my time, but I've seen documentaries...  Anyway, apparently the whole zine movement is starting to sweep the nation, and there are conventions, libraries, and everything!

The Art and Story gang started discussing the merits of small, individually produced zines versus larger scale mass produced magazines.  I won't go into everything they said, but something struck me really hard: The zine movement shares many common characteristics with the artwear movement. 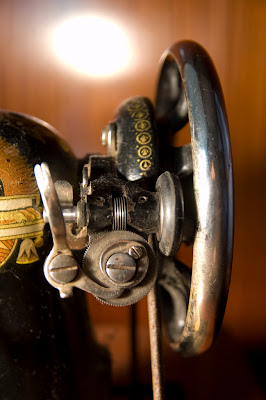 Zines are produced in spite of large-scale publishing, by Do-It-Yourself types that are personally motivated through the topic they're covering in their zine.  They have a sense of enthusiasm that is so profound they have to design and create a mini-publication so they can share their excitement with others.  Money or profit is not really a primary concern to these self-publishers, but instead it's sharing their devotion to their subject matter.  There is an air of "real-ness" to the publications that clearly demonstrates a sense of passion in the publishers, and this is often reflected in the quality of the information in the zine itself.  Consumers of zines read them in part because of this credibility.

The Art and Story boys also go on to explain how a tangible, physical piece of reading material has it's own virtues versus a digital "publication".  Unlike a blog, zines have a palpable quality that has charms a computer screen can't match.  In essence, there is a kind of "celebration of the primitive" as more authentic, heartfelt, and sensible.

When I sat down and thought about it, I realized that the burgeoning DIY clothing movement has many of the same inclinations.  We make our own things, take great pride in sharing them with others, hope to sell as many as we can, and emphasize hand-made qualities as more authentic than manufactured items.  There is a deep wellspring of heart in the DIY clothing community, as well as in the Zine community.  It's easy to simply purchase clothes, but the act of making them is it's own reward, and what is produced is often more desirable than a slick and polished piece from a designer's latest line because it has a real-ness that can't be acquired through a mall or outlet store.

I'm going to explore some more zines.  And I encourage us all to think about what we can gain by making pieces that are motivated from our hearts instead of our wallets.  Perhaps we can create things that are more relevant to our customers than they can get from their local Wal-Mart?  Food for thought.