I've alluded to this before, but now I have evidence that other people are talking about it, too! I subscribe to Threadbared, a blog that is (and this is a quote from their site) "...an evolving collaboration between two clotheshorse academics to discuss the politics, aesthetics, histories, theories, cultures and subcultures that go by the names 'fashion' and 'beauty'." I'm really enjoying it, albeit you can tell they're academics as I need to whip out my dictionary sometimes... 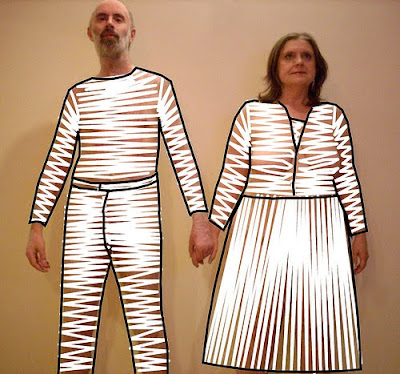 Anyway, their current post regards the "democratization of fashion". They explain that more and more fashionistas are on the rise without experience or credentials, and thanks to the internet they have as much say and artistic sway as a fashion critic who has been around for a while. Fashion has become a thing of the people, making their own decisions and spouting off about what they like and don't like with as much ease as a seasoned magazine editor, and often with as much of a following.

Without getting too much into whether an untrained/uneducated/naive perspective on fashion is more valid than someone who is jaded/bored/opinionated, they conclude that even though it's easier than ever to express yourself and wear what you like and don't like, it doesn't necessarily mean there is more freedom in fashion. There is also a lot more criticism out there, and thus a lot more pressure to follow fashion trends regardless of who establishes them. Since exposure to fashion movements is so much more widespread than it used to be, a fashionista can also more readily expect that everyone should be wearing it--there's no excuse to not be fashionable anymore! Apparently. According to the great unwashed masses.

It's keeping up with the Joneses to the nth degree. Thank you internet.

But I see a different trend. I don't see people saying, "Be fashionable and keep up!" I see people taking the opposite extreme. My friends don't necessarily believe in Fashion as much as they believe in Style. I think more and more people aren't caring about what's fashionable, and instead working hard to develop their own style--their own "mini-fashion" as it were. They're not looking to fit in quite so much, and care less about looking a particular way in order to have a particular effect on someone else.

For example, I see more and more tattoos on older people. In years past, a tattoo would have been scandalous, eliciting cries of "Drunken sailor! Cover your arms! Gross!" But not so much today. Same with piercings. I see many more people sporting unusual mustaches and beards, and mixing period/vintage clothing in with their contemporary garment choices. I am seeing more and more "anti-fashion", with "extreme clothing" (i.e. borderline costume) and ethnic attire being worn in more and more situations where previously it might have been perceived as inappropriate. Example after example of streetwear that's seemingly ridiculous get posted on the web for all to share.

And honestly, that's encouraging and exciting. It means that makers and creative people have a wider audience and a greater possibility of success.

I choose to be optimistic. I hope you do, too!