I got some great news in my email inbox the other day!

I had created some vests inspired by the characters of Glinda and Elphaba from Wicked the Musical (as I've shared here in this old post of mine).  It was a call for entries from Belle Armoire magazine.  They wanted clothing that was reminiscent of what Glinda or Elphaba might wear. 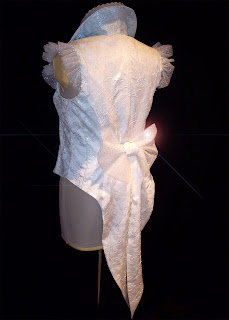 Being a costume designer, I was all over this.  I cranked out some vests, and sent them in.  Now, I had no idea what to expect.  I had never done this before.  I didn't know for sure if I was sending my vests to the right person, if I was including enough information, if I was coming across as incredibly overzealous and naive...

I decided I needed to take the chance, though.  I felt that if I never took the chance, I'd always regret never knowing.

So yesterday, I got an email back from Belle Armoire saying my vests had been chosen, and they needed an 800-word story outlining some specific topics they wanted to know more about.

I. Am. Stoked.  I have never had this happen before!!  My vests are going to be printed in the magazine, and I'm going to have a little story that accompanies them!  I am So Thrilled!!!

But this triggered a conversation between my partner and I, regarding what it is that I'm doing with my business Relished Artistry.  He made a series of comments that made me feel about 300 feet tall (I guess that's why I keep him around, huh?).  He asked why I was trying to make stuff that would "sell" when it's the really artistic and creative stuff that I'm making that is standing out the most. 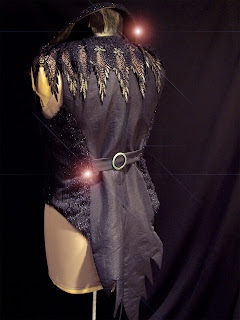 And this has sorta rocked my world...  I realized I do my best work when I'm not worried about it needing to "sell".  When I'm not thinking about money and instead concentrating my focus on the piece I'm working on, then I really seem to create stuff that shines...  The pieces that I have sold are probably my most artistically "free"...

This made me feel really really good.  It gives me permission to be the artist that I want to be but have been too scared to take the leap.  I've been so concerned about making money that I hadn't realized I was choking myself off from the very creative connection that would allow me the ability to make it.  I have to trust that my self expression will lead to bringing in enough money to survive.  I have to trust that if I stop thinking about money and instead concentrate on the whys/whats/hows of my art, that I will eventually sell enough to maintain my ability to keep expressing.

After all, it's called Relished Artistry, not "Making Money through Mass Produced Art".