I'm starting to move forward on my "Relished Fairy Tales" series.  Little Red is coming together!  Woohoo!  It's being cut out as we speak...er, "type"...  er, really it can't be (can it?) since I can't be in two places at once... 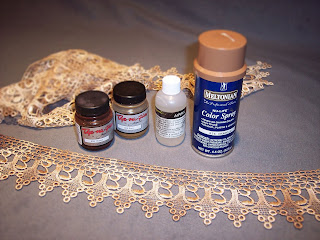 I thought I should update you on some of the techniques I'm using to put this particular "vested capelette" together.  It's an odd combo of garments, really.  I am using the same vest pattern that I used for these garments: here, here, and here.  Since Little Red comes with a cape and hood, I've eliminated the collar portion of the pattern.  I'm also making this vest a bit smaller--approximately size 14 (we'll see--I want to actually measure it, when it's done). 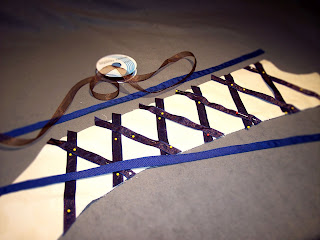 To bring you up to speed, I've selected the fabrics, and now I'm cutting them out.  I decided to start with the front with it's ribbon trim faux lacing and preparation of the decorative lace trim.

The lace trim needed to be dyed.  It was too pristine white for what I wanted.  I dipped the white rayon venetian lace in a dye bath of watered down ecru silk dye (with a bit of "Airfix" so I wouldn't have to rely on heat setting it), and then dabbed it with some watered down brown by the same manufacturer.  Finally, I spritzed it with a bit of brown shoe paint.  I think it now has that dingy, aged look I was seeking.

I then moved on to the center front panels.  The original thought was to make the front look like it was laced together, but I didn't want to really do that as it would be too complicated for the average person to put on...  So I opted for making a "faux-lacing" front by sewing ribbon trim on by machine that centered on a row of buttons which would make the vest button up just like any other vest.  I needed a particular color of ribbon, though, otherwise I felt it would look a bit too "costumey" (haha--not like the rest of it doesn't look that way!  LOL!).  So I chose two ribbons and sewed them together to create a look that fits closer into the rest of the color palette and textures of the rest of the materials.  By layering these two ribbons together, I got a slightly reflective blue look with tints of shiny brown to tone down the electric blue.  It ended up sort of "coppery", which would match the intricate buttons I selected quite nicely. 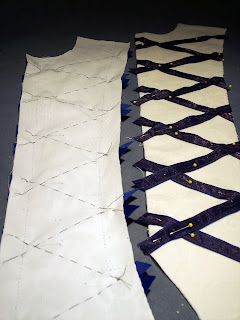 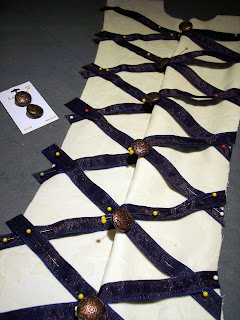 Placing the lacing was the hardest part.  How do you make it look like the laces all meet at the same point in the middle?  I chose to make the lacing come together precisely where the button holes would overlap.  I turned the material over after I had cut it out, took my 3" wide ruler, lined up the buttonhole placement in the middle of it, and drew two lines on the opposite side of the pattern piece, creating little "V"s all down the front panel pieces on the inside where it wouldn't show.  Then I thread basted the markings through to the other side, so I could see my lines on the outside.  With those guides, it was easy to place the ribbon exactly where I needed it to be.  All I need to do now is sew the ribbon down in place.

So when it's all done, the overlapping portions of the vest will line up and the lacing will mirror itself on each side of the front panels.

Tonight, I continue cutting out the rest of the panels along the vest, as well as the lining.  I've discovered that the materials I have selected aren't necessarily as firm and substantial as I'd like--they just don't have a weight that I would consider sturdy enough to measure up to the velour cape and hood.  So I've decided to flat line them with a layer of cotton, which will add a bit of body to them.  Without it, the vest will simply be too flimsy, and it'll look cheaply made since the materials don't have a commensurately balanced structure.

Alrighty!  More coming up soon as I progress even further.  Soon I'll be drafting up the pattern for the cloak and hood, and trying it out in some cheap material for a "mockup" before I cut it out of the real material.  I don't have patterns for those pieces yet, so I'll have to develop them.  That'll be fun!  More on that later!

Thanks to everyone who offered me advice on the mockingbird problems I was having...  It's still there (it's smarter now--it's moved to a tree that's very very tall and no one can reach it...), but I'm getting used to it.  I've taken to putting the fan on at night for white noise.  Turns out the earplugs weren't the cause of my sinus headaches--I actually have a slight cold which I've alleviated with medication--so I'm wearing them again and they're helping a great deal!  Woohoo!

Okay, until next time, Live life with Relish!