The development of the vest is happening fast now, folks!  I have cut out the pieces of the vest itself, assembled the outer layer (not the lining) and provided some finishing touches to the center front panels on the suggestion of my partner. 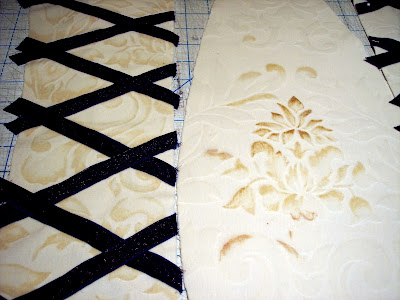 The center front closure is a heavy upholstery brocade of vanilla white.  It has a pattern cut into the pile of the fabric that barely registers unless you shift the fabric around to catch the light's reflection of the different textures.  I decided it needed to be a bit more overt, so I made a plan to accent the patterns.

I concocted a very watered down ecru fabric paint mixed with a bit of "clear extender" medium in it.  I then brushed it along the outer edges of the pattern, pulling it in toward the middle a bit, making each of the thicker-piled patterned areas stand out from the lower-piled background.

This provided just enough shading to bring out the details in the fabric and created an interesting texture to boot.

While I was at it, I used some of the same dye to start to distress the eyelette ruffle that's attached to the cape.  Turned out appropriately dingy and aged to match the rayon venetian lace! 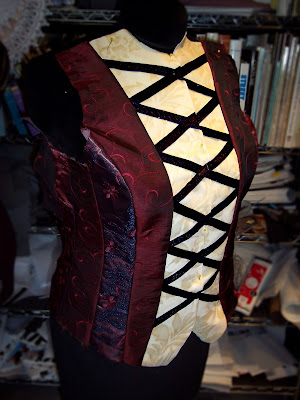 Then I cut out the rest of the garment and assembled all the pieces.  The garment is actually flatlined, meaning there's an extra layer of cotton in there behind the fabric that shows on the outside.  This makes it a bit more sturdy and stiffer.  There are some panels that actually have three layers--the organza fabric needed some form of backing behind it because it was see through!  So I chose a rich brown satin.  You can't tell it's there (the panel looks reddish-blue), but it adds a complimentary color that is more subtle than red or blue satin might be.  I'm also using the same brown  for the lining and the center back.

So that's how far I got yesterday!  More this afternoon!  : )