To think or not to think...

So I'm watching TV (dangerous, yes...) and I stumble upon this rerun episode of TLC's What Not to Wear that I haven't seen before.  Things were said, changes were made, transformations happened and ultimately I was glued to the screen wasting an entire hour of my day.

So midway through, I realized: No, this wasn't a waste.  This episode was actually bringing up many topics and issues about Fashion (with a capital "F") that I've struggled with for a long, long time.   And I thought I might blog about it, too, because I think there are others out there that feel the same way I do.

The episode featured Courtney, a 22-year-old woman who is a self-described geek.  She wears a lot of black, has a bunch of witty message t-shirts referring to geekdom, does a lot of gaming and practices sword fighting on the weekends.

There were a couple things Courtney said that really hit me.

"I don't want my clothes to lie about who I am."  Wow.  This cut right to the core of my quandary with Fashion, and elucidated my whole discomfort with the Fashion industry in general...  Where does one draw the line between displaying one's own personality and feeling like one is artificially projecting a fake personality? 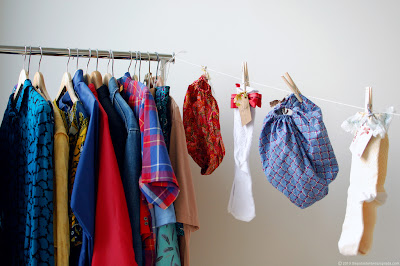 Courtney also said, "I'm scared of coming out of this process being something that I'm not." Well, I guess that's the point of the show, isn't it?  One gets nominated to do it so one won't appear the way they are currently...  There's something wrong with how they look in the first place, so one goes through the experience of the show to change how they appear.  It is indeed about change.

But her comment also speaks volumes regarding perspective.  Is she sophisticated chic when she's all done with the process, or is she simply glammed up?

In a nutshell--is it worth changing one stereotype for another?  To one group of people, Courtney was a "black-attired geek", but did she simply trade that in for what she felt was a "blonde ditz"?  What makes one stereotype more socially acceptable than another?

The hosts of the show, Stacy and Clinton, are as charming as ever, but do they realize that how they transform their guest's wardrobe is perceived by some to be as much of a stereotype style of dressing as what they're trying to discourage?  "Young Urban Professional" is a style tribe just like "Sword-Wielding Black T-Shirted Geek".

Some Things To Ponder
1)  Why is it appropriate to not share your personal interests in your professional life?  Why is there a disparity between levels of privacy? (And is that changing as younger generations embrace less and less privacy in their lives as acceptable--especially online?)
2) Does fashion reveal who you are or present who you want to appear to be?  Is there a line between the two, and where is it?
3) Who does fashion help?  Is it supposed to?  What do we perceive as the function of fashion?
4) How do all the former Punks, Goths, and Geeks of yesteryear perceive fashion and it's function today now that they're older?  When does one put aside what could be considered youthful expression for a more apparently adult appearance?  Who does this make comfortable?
5) In our world of DIY and Upcycled clothing, how much does personal expression trump fashion-appropriateness?
6) How does one draw the line between "being one's self" and "being situationally appropriate"?  Is the line between the two blurring as our culture moves forward?
7) Is personal expression becoming more important than the comfort of others?  Do we need to wear something to make others feel better?  When is this necessary?  How do we feel when we see someone dressing to make themselves feel comfortable instead of us?  Does that change our feelings about them?

My brain hurt after this episode, and it throbs a bit after writing this...  I need to go make something.  Haha!  Ah, the perfect antidote to thinking is feeling:  be creative and expressively emote by making something!  : )