I don't have a problem with saying people are becoming less and less "private".  Not that we desire to hide things from others, but the younger generation cares less about separating private and public lives.

And I can't help but ponder why.

There are two things that are informing what I think about this.  One is a blog post by Fred Belinsky at the Village Hat Shop.  He discusses the differences between generations, and why the Gen-Y youth may seem less friendly or less outgoing.  This from a hat maker!  In a nutshell, he says we have to remember how this latest generation has grown up.  We've inundated them with messages like "Don't talk to strangers," and demonstrably shown how disingenuous our leaders, political figures, and family units can be.  Our consumerist society has plagued them with advertisements and hidden agendas.  It's no wonder they've apparently grown up with what some would consider trust issues and a lack of social skills. 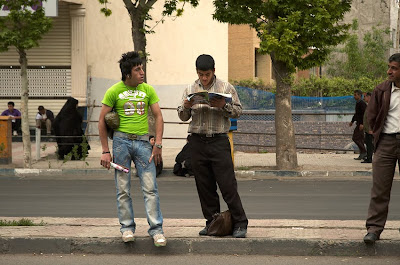 The other thing that makes me think is this article about the rise of clinically diagnosed Narcissism.  It's no wonder youth today seems a tad self-oriented--texting is not so much about what one is saying as much as it's about getting reactions to our statements--regardless of what they are.  Tweeting anyone?  Content and message has gone out the window in favor of measuring how much people are stirred by whatever it is we've tweeted. "Yawn," they post in blog comments.  How is that constructive, I ask?  it's not.  But it isn't about being constructive, it's about getting a reaction to the comment.

Facebook will be going through some Privacy Settings changes soon.  What they assumed was okay to make public by default hasn't turned out to be such a great idea.  So they're back-pedalling and trying to make some changes that restore some privacy controls.  Mark Zuckerberg, their 26-year-old founder, said some things in January that really struck a lot of people the wrong way, implying that our cultural concepts of privacy were old-fashioned and outdated.

But I think he may be right.  For his age group, anyway...

I think that many of the Gen-Y'ers out there don't care so much about their privacy as much as they care about being "real".  They aren't living multiple lives--they're totally out front.  They are who they are, and that's it.  They don't worry so much about information being shared with people they don't want to-much of their private and public personas are one and the same, and they've grown up being told that's the way it should be.  We've culturally reinforced it with messages of transparency, honesty, and being true to themselves. It's only us mature, old fogies that seem to have a problem with living lives that aren't compartmentalized--home vs. work, family vs. the guys, job interview vs. clubbing.

I know a lot of younger types from being a teacher for 10 years, and I know a lot of older types simply by working in costume shops (practicing a dying skill that youth don't seem interested in).  And being a Gen-Xer, I can say that I see a real disparity between the life-outlooks of these two generations.

But Pandora's Box has been opened.  The only thing constant is change.

Now, when it comes to wearing what one thinks is fashionable or wearing what one likes and speaks to one's personality, how do you think the DIY/Homemade movement is going to be impacted in the future versus major fashion labels and chain stores?  Cheap and convenient will always be there.  And that's what youth can afford right now.  But youth fades, and people grow up.  Do you think their desire to be themselves will change as they mature, or is it ingrained?  They aren't Baby Boomers--this youth generation won't be so influenced by the singular voices of mass media telling them what's cool.  There are too many voices.  All they can listen to is what's inside.

So again, who do you think is gonna win their hearts?  The fashion police, or their best friend's handpainted jeans?