New Insight into Colors of the Past 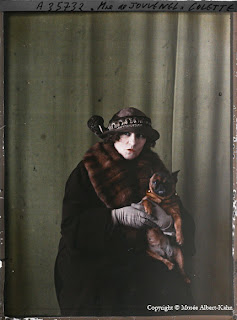 As a Costume Designer, I frequently look at historical photographs for my research.  There are collections of portraits that inform me as part of my process.  I investigate what people wore and how they wore it so I can replicate that a bit more accurately for our contemporary productions set in those historical eras.

It's part of my regular, normal process to research historical eras by looking at old photographs.  It's absolutely necessary for accuracy and for simple basic information. 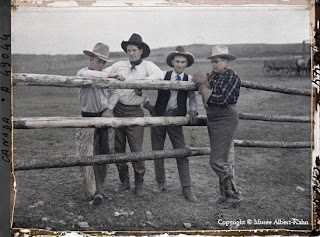 But color in photographs prior to 1935 is rare.  Kodak invented Kodachrome in 1935, and instant color was invented by Polaroid in 1963.  So finding color exposures is pretty uncommon before those times.  As a costume designer, I rely upon illustration and art to inform me about historical color palettes and favored hues during eras prior to the 1960s, really.  When one goes to explore magazines, it isn't until the 1960s that we experience photographs replacing illustrations as the main images.

So this is what makes finding color in photographs from the early 20th century so remarkable.  And there's a new book out featuring the work of a man who took a whole bunch of them: Albert Kahn. 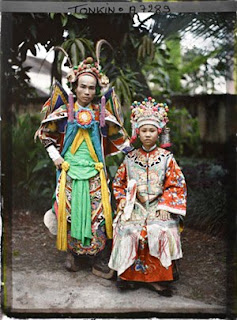 BBC Books, in association with Museé Albert Kahn, has published a book of his work to accompany a BBC television series.  The color images were originally developed in 1907 using a process involving thin layers of potato starch and carbon particles, according to Fanny Wentzel on citynoise.org.

Here are a few examples of the work in the book.  It includes photos from all around the world, and multiple cultures, making it even more fascinating!  The images almost look Photoshopped to our contemporary eye (in my opinion), but regardless--isn't it wonderful to see true color from 1907?!  It's like looking into a time machine!  Remarkable!!

Personally, I can't wait to get my hands on this book!  Woohoo! It can be purchased here.