Life after the Opera

So my job at the San Diego Opera has finished.  I am now back to working on my own stuff.

I have accepted some freelance construction work for two clients--one to help construct an Elizabethan doublet and pumpkin pants, and the other to build some costumes for an upcoming production of Noel Coward's Private Lives at the Cygnet Theatre in Old Town, here in San Diego.

The first project is one that I'm familiar with--I helped construct several pairs of pumpkin pants and doublets for a production of As You Like It several years ago at the Old Globe.  It was odd seeing that old pattern again... Here's a link to a picture of some of the work I had done at the Globe those many years ago.  It's looking pretty good--I'll end up finishing that up on Monday. 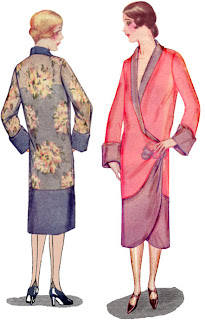 But this weekend I've been working on the Cygnet project, and it couldn't be much different...  I've modified a period pattern for a 1920's tulip kimono made by Decades of Style, specifically #2001.  However, it wasn't long enough, and we are doing a different sleeve treatment, so I could only use it's basics before I had to start some modifications to do what we need.  First, I transfered the pattern so we wouldn't have to cut up the pattern to one specific size, then I transfered that to kraft paper and did all the modifications on that.  I then cut out a mockup of basic lightweight muslin, and I'll be sewing it together tomorrow.  We're thinking it's going to be burn out velvet with a sheer chiffon lining--very  sexy and somewhat revealing but not quite...  It'll have that oriental style but won't be a true kimono per se.  I'm excited about it.  The fitting is on Wednesday.

Then I've got some other projects in the works--I'm helping to make a bid on a pretty big project--something I've not done before--but it's turning out to be a big step in a brave new direction that I need to take.  Even if it doesn't happen and we don't get the bid, I think it's already been a great experience to just think about the process and what it would entail.  All new to me!

Other than that, I'm working on making a bunch of Nun outfits for a charity group I volunteer for (long story--someday I'll explain) and I purchased 300 yards of lace to do that, so it'll be an extensive project as well.  I'm hoping it'll all come together quickly, as my summer will be quite busy if this bid comes through.

Regardless, I'm listening to podcasts during my day, contemplating doing some true soft sculpture clothing art pieces for display in a gallery setting someday, and trying to remember my Etsy storefront and make more pieces for that... Busy busy busy...  No money coming in, but a lot of potential.  We'll see.  I guess that's just the nature of how things work, you know?

My podcast I listened to today, Chris Oatley's Artcast Episode #18 interviewed Nathan Johnson, the composer for The Brothers Bloom.  He said an interesting thing:  If you don't expect the rewards, you don't have to play by the rules.  He was talking about society.  And that dovetailed into another conversation on another episode that spoke of artists "living beneath their means" and being happier.  I've been pondering that.  And I'll have more thoughts and conclusions in my next post.  But it's food for thought, eh?

Until next time--Live Life With Relish!