I've never been a "drawing" kind of artist.  While drawing wasn't a horrible hurdle when I was growing up, I found that I never had the interest to excel at it.  I just wasn't interested in doing so.  Later, as I reached college and decided costume design was something I wanted to pursue, I rapidly realized I needed more drawing lessons in order to draw the human figure and clothing.

And it's been a painful process ever since... I've found that I "cartoon" quite a bit, and my looser drawings have always been the most artistically satisfying.  But my first instinct is to tighten up, and so I developed a pseudo-system for my renderings.  They aren't the most pleasing visual statements, but they're just supposed to be tools that get the information in my head across to directors and actors.

As a consequence, I never really developed that most important tool of an artist: maintaining a sketchbook.

Now we've all seen those published sketchbooks where the drawings are beautiful, and the pages are dynamically arranged, and even the doodling is fascinating and eye-catching.  But I've always been intimidated by those, and thought to myself, "Nah, I'm not doing that kind of art so I don't need to do that."  It was, in retrospect, a defense mechanism I used so I wouldn't have to experience the pain of drawing poorly and the daily discipline required to develop it as a workable skill. 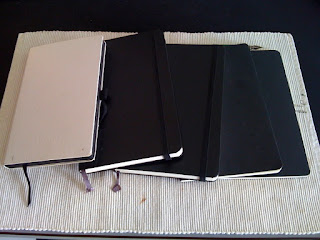 And now...  Oy.  I find myself really needing the use of a sketchbook.  Not to draw, per se, but just to record everything that I'm responding to... My podcast addiction has led me to contemplate all kinds of things that I want to share--responses to what I hear, new clothing thoughts, art ideas, websites, experiences in my past...  And I've had to take whatever notepad that's been sitting nearby and quickly scratch out a few notes, recording the inspiration as it comes.

As a result, I've found myself with several legal pads floating around filled with indecipherable pictures or notes that have no context, and I find myself searching for the right piece of paper as I try to draw upon what I was thinking about 3 days previously when I wrote it down in the middle of my workday...

It's been tough not having some kind of notepad around where I can accumulate all these ideas in one spot.  Instead, I play the paper chase game...  And hope I can trigger my memory and recall what I had been thinking about...  It's sometimes an exercise in frustration, and I can't tell you about all the good ideas that I've lost.  If I could, I wouldn't need a sketchbook...

I recall documentaries of artists that whip out their moleskin notebooks with a drawing pencil wedged inside, frantically getting down the "quality of light" so they can paint it later on in their studio.  Even my grandfather carried around a little Mead notebook so he could take notes.  Of course, he was in his late 60's...  Maybe I'm getting old, too.  Maybe I'm just more attune to responding to inspiration.  Maybe I simply need to get it out of my head so I can be open to something else that's new.  I'm not sure.  But a sketchbook is what I'm investing in next.