From the costume perspective, working at an Opera isn't much different than working at a theatre--it's still clothing, it's still a bunch of costumes.  The only difference is that there's a lot of singing while they wear them. 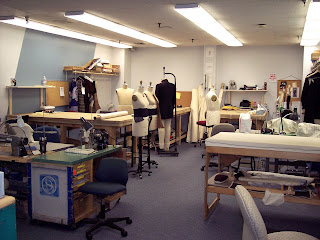 My time at the San Diego Opera is turning out to be a great experience.  I work with about 25 other people, doing exactly what I usually do--cutting out and assembling costumes for actors.  Their hierarchy is that of a union shop--IATSE to be exact (International Alliance of Theatrical Stage Employees).  It's been an interesting experience to see how things work within the scope of a union's structure, but it's not affected the work that I'm supposed to do--it's still the same job just in a different hierarchy.

I'm not sure I can describe it to you as I am not sure I know the dynamics of it myself, and I've not had time to really talk to anyone about what it all means, but the pay is good and the work is quality, and the people involved are incredibly friendly.  I'm not one to sit and jabber much, and I've been working diligently with my headset on simply trying to get all the coats and pants I've needed to get cut out finished and completed, so I must say it's not so different from what I've experienced in other shops.  And that's a relief.  I don't know why, but seeing as how the majority of shops on San Diego are non-union, I think I was expecting something significantly altered from the norm that I've grown up working within, and it's not been as much of a transition that I had anticipated!  I'm relieved! 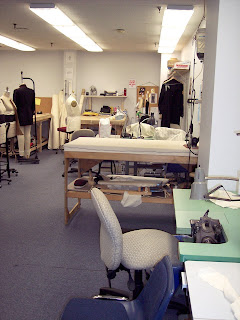 The space itself (I've provided a couple pics) is a former bank space.  It's spread out over several rooms--two shop spaces, 3 fitting areas, a break room, a Union Steward office, a Costume Shop Manager office, a tagging room, and some storage areas. The craft area is actually in the old bank vault, can you believe it?  That door is solid and heavy!  LOL!  And aside from the fact that there's carpet on the floor (I pity the custodial staff and their poor vacuums...  Pins.  Thread.  Fabric clippings. Ugh), it's really quite comfortable.  All the equipment we need is right there.  It's going swimmingly.

I've been working on cutting out 7 coats and 7 pairs of pants for Banda characters in La Boheme--they play an onstage band, but really do play instruments, ironically.  I'm working with a Cutter/Draper/Tailor whom I've never really worked with before in the capacity of a First Hand, and sometimes that can mean a long period of "getting to know you" as we figure out how we each operate.  But in general it's worked out smoothly, and I won't be cutting out the pattern pieces all the time--I started stitching today.  In a week and 2 days, we cut everything out and are now assembling things.  All told, each outfit has around 52 pieces to pattern, cut, and put together, so this is a huge accomplishment for all of us working on it together.  First dress is Monday night...  hehe...  I'm gonna fall down after it's all done.  LOL!

The weather here in San Diego has been very wet lately, thus preventing me from spending much time in my studio working on projects, and we'll see if I can maintain my drive once I've been at the Opera for a couple weeks.  It's hard to work on something for 8 hours a day, then come home and do the same thing in my studio for another 4 hours...  But it may come to that.  I've got that replacement coat project that I must complete as soon as I can.  I have completed the painting, now it's the assembly that I have to get done.  And that's actually the easy part, so we'll see if I can complete it quickly.

Other than that, my last couple of days have been about staying warm and dry.  It's going well. Until next time, Live Life with Relish!