My experiences working in the Bonnie and Clyde costume shop at La Jolla Playhouse are really turning out to be quite remarkable!  We're all hard at work sewing together several 1930's outfits, mostly for the women, and doing alterations on several rented items for the men.

I took some more pictures, so I think I'll just comment on them. 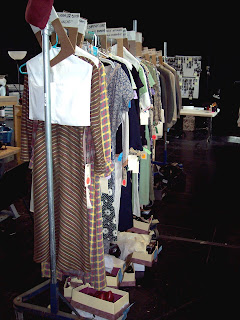 The picture above is a shot of some of the costumes for the women.  Many of the items that are being used in the show already exist, being rented from various rental houses like Western Costume.  La Jolla has a stock of items already, and the goal is to use as much as we can that's appropriate from pre-existing garments, but sometimes that's not possible when the garment is too fragile or there are specific requirements in the script that prohibit their use (like getting wet, etc.).  This rolling rack is chock full of garments that have already been tried on and decided upon, either for a media shot for promotional materials or in the show itself.  We've worked our way through most of these and repaired the holes and tears that were in them or adjusted them for fit.  Notice all the shoes in the bottom--Actors Equity (the actors union) requires that the cast have new shoes specific for each actor (who wants to spend a month wearing someone else's icky shoes?), so there are lots of pairs for the actors waiting to be tried on.  Shoes can be a pricey expenditure, especially when you're trying to find something that's not contemporary...  And believe it or not, sometimes the period look is defined by the footwear! 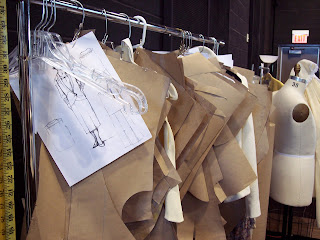 This picture is of the rack that holds all the patterns for the costumes we're actually building.  Each hanger holds the paper pattern pieces for a different specific costume.  As you can see, there are a lot of them!  In the front, you can see one of the designer's renderings.  This is what the Cutter uses to draft or drape the pattern to the specific actor's measurements, just like Project Runway! 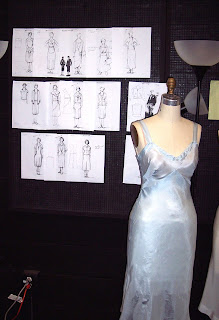 The above pic of the different designs we're building, along with a mockup of a period slip.  Can I just say we've got a lot of work to do?  : )

Sometimes I get asked, "Why don't you just use real vintage garments?"  Well, we can't for lots of reasons.  For one, people are much bigger than they were back then...  You've noticed how basketball players seem to get bigger and bigger, and teenagers always seem to grow taller than their parents?  Well, our contemporary bodies rarely fit into vintage garments anymore--we're just too big!  And those garments that have survived are rarely of a size that's actually useable because in order to survive they've rarely been used.  And that usually means they aren't the "typical size", as those garments that were useable back then were probably used often, and haven't lasted long enough to make it through the last 80 years...  As fashion has changed, our wardrobes have been discarded so there's not much left anymore...  The average man in World War II had a 38" chest.  Today the average is 42".  And the average men's shoe size has gone from an 8.5 to a 10.  Our bodies are just different...

On top of that, when was the last time you wore a garment 8 times a week and physically exerted yourself?  Costumes have to be very durable to meet that stress--they get much more wear and tear than a normal, every day piece of clothing.  Vintage garments simply can't handle the strain...

And I finally finished my audiobook, "Inkheart" by Cornelia Funke (narrated by Lynn Redgrave), and I'm lookin' for another one to listen to... Any suggestions?  Sure makes the day go quicker!  : )