"Costume-ology" on the First Week on Bonnie and Clyde

And I am so tired.  Ha!  No good excuses, except to explain that I have developed some horrible habits since my job at my former university ended, and screwing up my sleeping habits was high among them!  By the time this last Friday came around, I was so tired at work my coffee was no longer effective, my eyes were watering, and it was all I could do just to keep quiet as I continually yawned...

But I have to say, I am having a blast!!  I love this experience so far!  The small group of people that I am working with on La Jolla Playhouse's Bonnie and Clyde are really great--there were 6 costume technicians sewing in the shop--and we laugh and joke and debate together but we don't waste time.  Every one of us truly loves what we're doing, and it's fun to make things together, but we know we must remain diligent and on task.  It's truly a professional group of folk that can have fun and still get things done.

I've been hired as a Stitcher.  In costume-shop-terms, that's the member of a "cutting team" who is responsible for actually sewing the garments that have been previously patterned and cut out by other people.  I assemble whatever pieces of the costumes I'm told to, as well as help complete the myriad of alterations that are needed on clothing already built.

Usually, a cutting team involves a Cutter/Draper as the leader.  She translates the designer's picture into reality, developing the pattern and cutting it out of craft paper.  Then this person hands off the pattern to her assistant, also known as a First Hand who cuts the pattern out of the chosen fabric as well as all the linings & interfacings and such.   Then it gets handed to me (the stitcher), and I assemble those pieces under their supervision.  There may be several stitchers or first hands on a team, depending on how many costumes are assigned to it and the nature of the construction.

My experience in this shop is unique, since there are so few of us that there is really only one team.  This week, we did mostly alterations, but toward the end we cut out some of the garments from the fabric that had arrived for us from New York City, chosen by the designer and his assistants who are selecting it from the plethora of options there in NYC's fabric district. 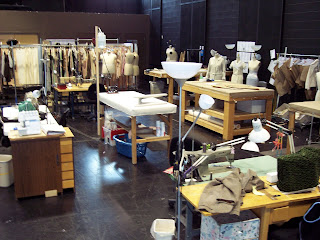 At this point in the process of Bonnie and Clyde, the designer has already conceptualized what the costumes look like, drawn pictures, and had fittings with the actors using "mockups" (cheap versions of the costumes, usually out of muslin) that were altered and adjusted as needed.  Now, the patterns have been tweeked and we're actually assembling the garments for real out of real fabric.

We have a lot to do...  I'm not sure of the exact number of garments we have to build, but it's somewhere between 9 to 11 different dresses and several miscellaneous pieces in about 3 weeks...  All of them are period representations of 1930's dust bowl fashion--charming and simple on the surface, but complicated and precise when you scratch under the surface.  The colors chosen by the designer are in the sage greens, dusty roses, and rich browns that lend themselves to the antique feel of yesteryear.  It's going to be quite beautiful when it's all done!

And so we press forward!   This week, I helped repair several men's suits from a rental house that were literally rotting away and in horrible shape, switched out a decrepit vest back for a new one, significantly altered a thick wool vest completely bound in knit ribbing, helped cut out two dresses (one of which was a linen-look asymmetrical plaid that was cut on the bias--ugh--which sadly had to be done twice because I messed up the first time), and assembled some mockup slips.

And I've listened to "The Lost Symbol" by Dan Brown on audiobook, as well as falling in love with the completely and totally enchanting "Inkheart" By Cornelia Funke (& read by Lynn Redgrave) that I am in the middle of and can't recommend enough for bed-time storytelling to young girls.  Any other suggestions for good audiobooks?  Hard to find one on sewing...hehe...

And so.  This coming week will be another adventure, and I will update you all on what I'm doing, with some pics and such.  Relished Artistry is still coming along--not much to say on that front.  I have to earn money to buy some lining to move onto my next projects.  I am trying to figure out what I can make that's more in the "affordable" range--$10-20, but haven't hit upon anything yet.  Perhaps I will stumble upon something soon.

Take care!  Talk with ya soon!  Live life with Relish!!