How I Sew, Part 3: A Vest Tutorial Continued

Last time, we had assembled the outer layer of the vest, complete with flat lining.  Now we're moving on to assembling the lining, the collar, and putting the two layers together.

This particular post centers a lot on sewing techniques and methods--some of it can seem elementary to some, and conversely complicated to others.  It's all good information to know, and the principles are useful regardless of your experience sewing.  So take what you can use and ignore the rest!  : )

Matching Marks:  We have all the pieces cut out, now we're going to sew them together.  People do this in different ways, but I start with the two ends of the pieces I'm pinning, and then match the different points, and then fill in the rest.  I pin along the line that I'm sewing, not across it, to ensure each line is matched up consistently.  Some folks pin across the points at which they're sewing because it's easy to simply sew over the top of the needles.  This is most common for home sewing, where there are no lines to follow but you're sewing 5/8ths of an inch from the edge of the fabric. Pinning along the lines themselves necessitates that you take the pins out as you go along, but it's much more accurate than pinning across the lines. 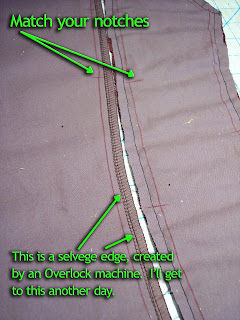 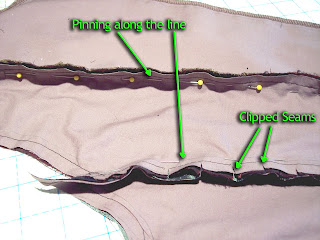 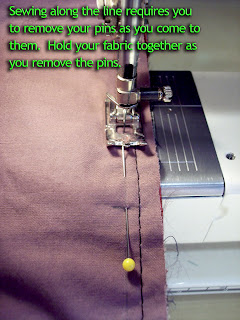 When that's done, the vest back gets attached.  Make sure to cut out little cinchers for the the back if you want them.  I cut 3" wide strips, fold them in half, then taper them off from one end to another by sewing them at an angle. 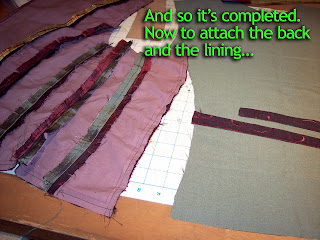 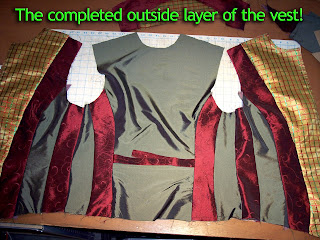 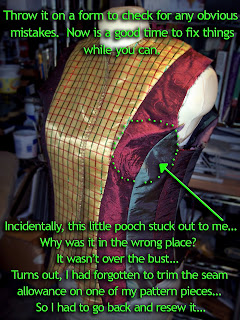 It's always a good idea to check everything as you go.  I found a mistake I had to fix in mine--a pattern transfer problem from the very very beginning!  This problem SHOULD have been remedied way earlier, but I trusted that I didn't need to "true up" the pattern... More on that another day... That's a whole step that I honestly skipped that I shouldn't have...

Now to move on to the lining.  I didn't want the lining to match the outside exactly--too many seam lines matching on the inside would have meant extra bulk the wearer doesn't need.  So I put the pattern back together with Magic Tape.  Why Magic Tape?  You can write on it with pencil, and it's easy to work with if you're careful.  Make sure you cut out a facing piece for the buttonhole closure in the front if you want it.

When you're done cutting it out, assemble it! 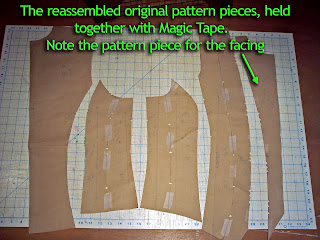 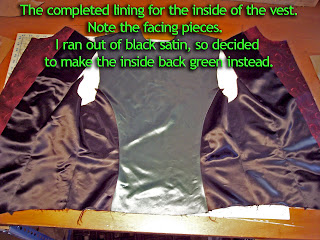 The collar assembly brings up several interesting quandaries.  It's a convex curve to a concave curve...  Careful clipping is required.  If I had decided to make the collar even stiffer by inserting interfacing or some such thing, I would have needed to insert it when I was attaching the flatlining to these pieces.  It's too late now. But I'm confident it will be fine! 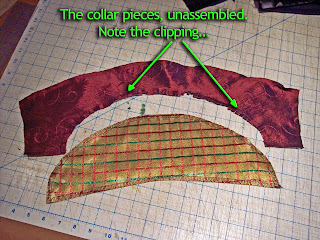 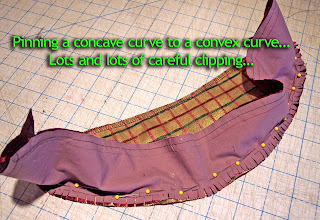 Trim, clip, grade and make your corners nice and sharp.  Then it's ready to be inserted into the vest! 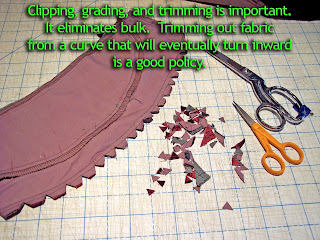 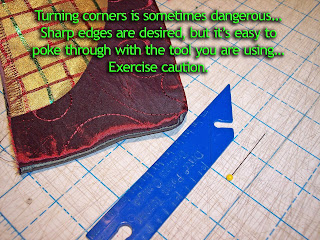 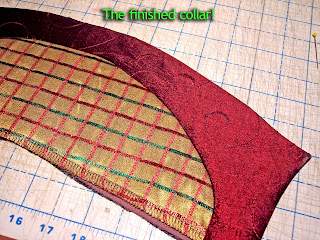 The final step for today is to assemble the vest to the lining.  Because we have a collar, we can't sew up the neckline like one usually would--we have to wait until the collar is inserted.  But we can still sew up the outside edge and the armholes.  Make sure you sew the garment from top to bottom as much as possible--this helps with grainlines, and on a fabric that has a nap (like velvet) it keeps it nice and clean.  It's just a good method of doing things in general.

The center front closure has stripes up and down it.  You may need to sew each side a couple times to make sure you've lined up the stripes correctly.  Check it to make sure you haven't accidently shifted things around, because the front will look icky if you don't.  If the pattern doesn't follow your drawn lines, figure out which is best: to resew all the layers together again correctly (going backwards significantly) or to woodge the line carefully by resewing and ignoring your drawn lines.  Too much of either is bad, but too little and your closure will look very messy.

Okay, that's enough for today!  We'll finish the vest later!  I hope this is interesting, and helps with your own projects...  Leave me a comment if you're confused or have questions! I'd love to hear from ya!  : )