I've been reeling from a particular e-book that was recently released, written by "Sister" Diane Gilleland of Craftypod fame (www.craftypod.com).  It's called Creating a Blog Audience.  It's the "sequel" to another e-book that she published called Making a Great Blog, and when you put the two together they pack a mind melting whollop that has really made me sit back and ponder stuff.  (Incidently, I don't know why she calls herself "Sister" Diane, but it works.  She's preachin' good stuff, lemme tell ya!)

First off, let me say that I've listened to all of the episodes of Sister Diane's podcasts, and I can't recommend it highly enough.  I was raving to a colleague about it one day, only to learn that she actually listened to Sister Diane, too!  My friend isn't into the podcast universe as much as I am, so to learn that  she had actually heard of it was a real surprise!  I download it off of iTunes (I have a Mac computer) and listen to it while I work in my studio.  Makes me feel like I'm multi-tasking with the best of them, and actually getting twice as much done! 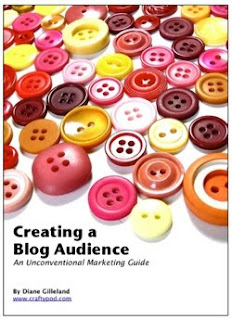 When I heard that she was releasing this book, I pounced on it and downloaded it and the other blogging book she wrote.  Both come with extra "workbook" sheets that let you complete her exercises that she outlines.  And those exercises have been incredibly interesting to me.

I read the first book straight through, and loved it.  Just to help explain the impact it's had on me, I now have a poster on my wall by my computer that lists the "reasons I write on my blog".  It's quite useful in maintaining my focus!  I'm now measuring everything I contemplate writing about against those reasons, and it helps me figure out appropriateness, validity, and usefulness.

But the second book really made me sit back and think about stuff, and I've had to actually set it aside for a bit because it's made me realize I have a lot of self-educating to do.  In the second chapter, it poses a question:   "What kinds of crafts do your ideal audience members like to do?"  And that perplexed me.  I realized very very quickly, I had very little idea of the kind of crafter/artist I was writing for.  I was just "putting it out there" without any real thought behind who might actually be interested in any of it.

And that led me to realize that I don't spend nearly enough time actually reading other people's expressions.  If I am going to write anything that is relevant and interesting to anyone, I have to know what else is being said, what they're interested in, and provide a reason why they should read my blog in the first place.

Which led me back to my reasons on my poster.  And it's slowly starting to sink in that my reasons for writing the blog are rather "self-oriented".  I started this blog to help promote my wearable art business, and I'm coming to see that simply isn't enough.  Who wants to read a blog full of self-aggrandizing advertising?  I certainly don't.

So from here on out, I'm not only going to update you on what I'm working on, but I'm also shifting the focus away from me and more toward things that are interesting in a more practical sense.  Philosophy, tutorials, interesting links...  Since I'm not teaching theatre anymore, I might as well use that "bank" of resources and share them with you.  Things like costume history, pattern drafting tutorials, online costume resources, material resources, small business advice, theatrical crafting materials, period styles and ornament, clothing accessories, theatrical movements, philosophies, art history...  I'm excited about making this blog my classroom.

If I can help my blog audience relish their artistic capabilities through lessons, advice, examples, projects, and juicy discussions, then this blog will serve a purpose beyond simply being a tool for me.  It can be a tool for you, too.

And somehow, I feel really empowered by that, you know?