Costuming and Fashion: One of these things is not like the other...

Okay this is bit of a long one.  Wow, do I have a mouthful to say tonight! And it's perfect to start out the new direction of this blog.  AND it's all about the latest episode of Project Runway, which aired Thursday, September 24.

The challenge for the designer/contestants was to create a look for a character in one of several movie genres: Western, Film Noir, Period, Science Fiction/Fantasy, and Action/Adventure.  It had to be completed in one day, and they had $150.

When I heard the challenge, I thought "Cool!  This is right up my alley!"

And then I saw the results, and I was reminded how frustrating it is to be undervalued as a costume designer in the face of the fashion industry.

Tonight's blog is about the definition of "Costume".  What is a costume, really?  Is it a subset of fashion?  Is it a matter of degree?  Or is it something altogether completely separate?

No.  A costume is fashion.  However, a costume is much more overtly defined by a purpose and function that fashion doesn't have to deal with.

First, a costume has a purpose.  In a sense, fashion does as well, but not as explicitly defined as a costume's.  A costume is worn as part of a larger, collaborative effort that has a clear purpose: a performance of some kind, whether it's to a party or as part of a production that's filmed or live.  A uniform is also considered a costume:  it clearly delineates a person as a part of a larger whole separate from everyone else.

Second, a costume (unlike fashion) must support the vision of how that purpose is expressed.  That may be focused through the eyes of a particular director or team, a studio, a bride, a choreographer, a corporate executive, or even a government.

Third, the costume must meet the dictates of a host of different "parameters" that are inherent to the nature of the expression.  Is it a script?  A cultural ritual like graduation or a wedding?  Is it the impression desired for a fast food restaurant?  Or the functionality of camouflage in a combat setting?  How much time, money, and personnel is there to assemble it?

My experience is in theatre.  My designs are regulated by a host of logistics that I have little, if any, control over.  These include the script, the concept of the piece, and the genre.  The purpose of the event dictates how those logistics are dealt with--is it better to get the message of the play across by putting it in period or should we place Arthur Miller's pilgrims from "The Crucible" on the moon?  Does the language have a poetic quality that can be abstracted somehow (putting everyone in foam rubber, for example), or do we need to put everyone in Masterpiece Theatre realism?

Fashion doesn't deal with these quandaries.  Instead of a script, fashion deals with the parameters set down by one's particular "Style Tribe".

What's a style tribe?  It's the difference between what the sorority girls wear and the corporate executives.  The movie, "Legally Blonde", was an exercise in demonstrating conflicting style tribes.  Tribes are defined by social class, age, gender, climate, politics, philosophies, occassion, or any number of different factors.  And there are subsets:  colleges have a wide variety of style tribes, including the artists, the stoners, the business students, the jocks, the science geeks, and the aforementioned sorority girls.

Each of these tribes comes with a host of what is "appropriate to wear" and what is not.  Stepping outside the boundaries of what each tribe has determined as acceptable marks you as "not one of us".  (Incidentally, that's why clothing can be terribly important to younger folk--fitting in is part of one's self identity...)  New Yorkers dress differently than Southern Californians.  The Howells look different from Marianne and Ginger.

You get the point.

The problem with this week's challenge on Project Runway was that they asked people to design a costume for a character in a movie genre.  What they really wanted was a piece of fashion that was influenced by a movie genre.

Let's look at some movies that can help...  These examples were costumes that were influenced by fashion.  (Sometimes it's helpful to look at the opposite situation.)  Please note that it's a given in the costume design world that before the mid-1970's, historical accuracy in film was "optional".  Some of our most beloved films that we regard as "period" are far from it.

For example:  "My Fair Lady".  That musical is set in March of 1912.  But you couldn't tell that from the costumes:  they're about as 1960's as you can get!  Eliza's traveling outfit, her Ascot Races dress, even her ball gown are all heavily influenced by the styles and fashions of 1964. 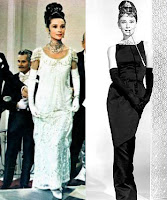 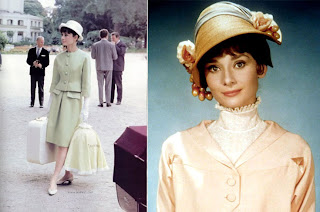 Another example:  "Cleopatra", with Elizabeth Taylor.  Are you kidding me?  Period accuracy would have warranted an X-rating.  No, no, no...  There was no such a thing as showing too much skin back in the Egyptian era... 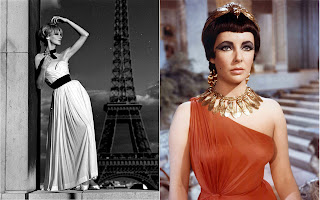 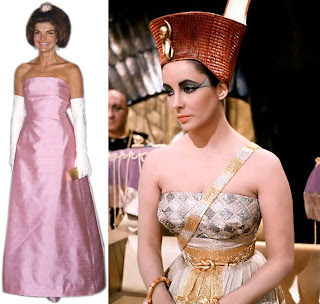 The following examples below use costuming in a more appropriate manner.  These films purposely mixed period styles and contemporary influences into a look all their own: Bladerunner, for example.  This is a sci-fi movie that is incredibly influenced by the film noir genre, on purpose, as a choice.  So much of it was straight out of the 1940's it could have been filmed in black and white... 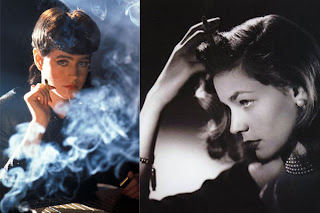 Or how about Moulin Rouge?  Those costumes were purposely enhanced from their period-accurate originals to include splashes of bright, garish colors and contrasting textures.  They started with research.  They made them non-period when they wanted them to be.  They purposely blurred the lines between period accurate representation of historical fashion and created their interpretations of it in costume. 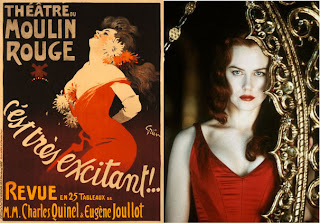 Today, genre accuracy in costuming is a highly valued skill:  Lord of the Rings, Shakespeare in Love, Mad Men, Titanic, Evita, Memoirs of a Geisha, Elizabeth: The Golden Age, Chicago, Milk, Schindler's List, Dances with Wolves, Star Wars...  All of these have their own parameters of what fits and what doesn't, most of them dictated by what is appropriate historically or as part of the "vision" that makes the purpose of the film/TV program  more clearly evident.  It doesn't have to be "real" or historically accurate, it's what fits the parameters.  Working from accuracy to non-accuracy as a choice.  On purpose.

So.  What did we get on Project Runway?  We didn't get genre costumes.  We didn't get historical fashion with elaboration.  We got contemporary fashion inspired by movie genres.  Without a real grounding in costume history, there was no way they could accurately represent these genres.  Inevitably, they created "versions" of them that were clearly not accurately part of those genres at all...  Here's a link to the pics of the end result.

Our contemporary sensibility doesn't read contemporary-fusion into historical accuracy as a choice.  It reads it as inaccurate, or wrong.  Only when the degree of debarkation from the original period's style is clearly strong enough to distinguish the difference do we accept it as a "take" or "interpretation" or "stylization" of what is, in our heads, the "real thing".


There are too many that know too much to get away with faking anymore.

I'm not advocating simply replicating the past.  What's the point in that?  But what I am saying is that on this particular episode, the purpose/function was not made clear.  They were designing for genres as style tribes, not as part of a production.  They weren't designing costumes, they were designing fashions that had costume elements.

It really, REALLY disturbs me that costume is somehow denigrated and considered "lesser than" by so-called fashionistas.  Being a costume designer is HARD.  You actually work with other people's ideas and collaborate--a runway dress does not have it's own opinions.  An actor does!!  Costuming requires a real operating knowledge of costume and fashion history, and the ability to implement it when appropriate, a lot of people skills and a host of other widely varied skills. 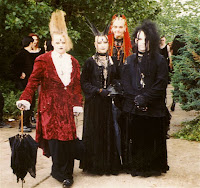 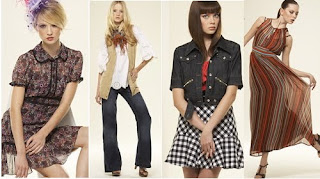 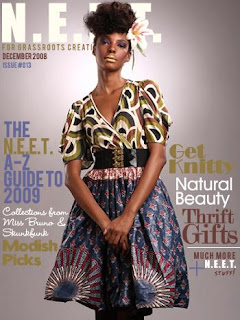 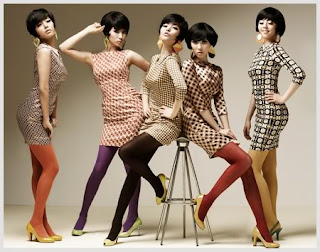 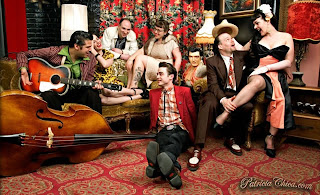 "Costumey" is not synonymous with "inappropriate or overdone fashion".  It is not "too dramatic", or "fake".  That's insulting.

What is really at issue is how one personally determines when the degree of "dramatic flair" in one's fashion sensibility is too much for one's own taste, situation, etc.

And it's funny how I look at runway shows today, and all I see is fashion dipping more and more into costuming's dramatic flair by leaps and bounds, stretching that imaginary line of "appropriateness/too much drama" further and further.  Given different defining parameters and purposes and logistics, those clothes would be considered costumes without any changes whatsoever.

It's all about context.

In a sense, one could say that everything we wear is a costume, and that we pull attire from our closets based on outside parameters every day, depending on what we're doing, or how we're feeling, or the weather, or whatever...  If anything, it seems to me that fashion is a contemporary subset of costuming, not the other way around.

Life life with Relish!  And wear that costume well!  : )