A Visit to an Art Studio

I've been on a quest to find a studio space to move my stuff out of my garage. There's something about a studio--it focuses a person into keeping their art part of their job, their livelihood. If I go away to work, I somehow focus my attention better... It's the "work-at-home" syndrome that worries me--I don't want to not get things done because I'm working at home. Instead, going somewhere else to work might be a better option for me. But I'm still at home right now, and with no income as of yet, my possibilities of moving out are pretty slim... hehe... I have some colleagues that are thinking about going in on a space, and working together might help us expand our possibilities and job prospects... There's a whole 'nother story to that, and I won't go into it yet, but suffice to say a studio space would work for me on a number of levels.

So I went downtown today to visit my friend Joan Mathison. Joan and I worked together at the Old Globe Theatre for a number of years in the costume shop, and she has always been working on her paintings in bits and pieces since I've known her. Now she works for a company that does... well... architecture/interior design stuff... I'm not really sure, but it's sort of artistic. She has her own studio space that she does painting in, and her skills have developed rapidly in beautiful directions--her landscapes are quite stunning.

She's one of the few "studio artists" that I know. When she answered my email she felt she didn't know much about the San Diego art scene. I can only suppose it's because she paints when she can--it's never been her sole vocation that I can remember. But when I got to her studio to talk about her space, she could have fooled me. Not only was she on the Board for the building, she knew practically everyone that had a space there. I was walked through many of the spaces, and she introduced me to some of her fellow tenants!

When I got there, I realized I'd been in the building once before many years ago. It had been hot and crowded as it used to be on a walking tour of art studios in the downtown area of San Diego--a once per year event called ArtWalk that has since moved out of downtown.

But it was under different management now--folks that care about making sure artists have affordable studio space, and that there remain artists in the downtown area (San Diego's downtown urban renovations ala a new baseball park have out priced many of the artists that used/lived in that area...). One of the last holdouts. And now it was a lot nicer. Still no air conditioning, and most of the spaces have lower walls on the communal second floor, but it was intriguing. The third floor, where Joan shared a very large 600 square foot studio with another artist, had more private spaces all off a central gallery area where they would have shows. Hers was one of the very very few that actually had water.

My conversation with Joan brought up a lot of topics to think about. What direction I was gonna take this, why wasn't I at my university job anymore, were there similar folk like myself in the building... Most of the artists used their studios for painting, but there were a couple that had sewing machines there, and even an actual tailor.

It was food for thought. Just under $150 a month for the much smaller spaces (Joan shared one of the biggest studio spaces in the building), all utilities included. Many artists brought in refrigerators, extra lighting, etc. One artist who didn't have windows in his studio arranged to have his portable AC unit there for an extra $50 a month. I'm not sure how many spaces were there--35 maybe?

I'm not sure what to think about it. I'm not sure I'm in a position to afford something until I get my feet on the ground, and yet "going in" with my colleagues could make it affordable. Hm. Food for thought. More on this later.

The pic is of the building. Yeah. It's above a Hooters Restaurant. Ha!! Live life with Relish! : ) 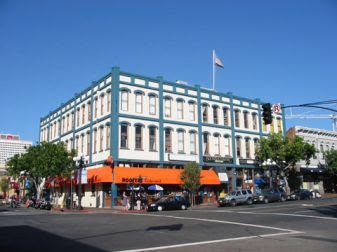