A Trip to Liberty Station 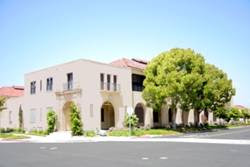 I'm not at all sure if many of you know what's been happening with Liberty Station over in Point Loma... This is what happened to me on Sunday.
My friend Robin Sanford Roberts (a professional theatrical set designer whom I worked with for 6 years as a colleague at the university I used to be at) is now teaching with a brand new arts endeavor--the Bravo School of Art. She's going to be teaching four different classes for them in a variety of different subject all the way from Scene Design to nature creatures made from shells and rocks. Some of them are oriented toward kids and others toward adults. The entire project is really quite fascinating--the school is just getting started and will be offering a variety of different classes in techniques and styles.
Their open house was this Sunday, and Robin invited me to attend. I had never been to Liberty Station before. It's an area that's just getting redeveloped from being a former Naval Training Center to being a real hub of community in the Point Loma area. One of the former barracks has been renovated to be a series of really beautiful art studios and retail spaces, and that's where the Bravo School of Art is.
So my partner, Jonathan, and I drove there, and I must say I am very very impressed. Wow. What an instant community with still more growth and expansion left to do!! First off, there's a lot of retail stores and chains already moving in--the building opposite of "Barracks 19" (where the art studios are now) had an Ace Hardware in it already, with an Art Quilt Gallery diagonal from that... Quite an eclectic area, it's being promoted as the new arts hub of San Diego, being a new sort of "Balboa Park" experience. It's well manicured lawns and open spaces are certainly sunny, and it has a wonderful campus/collegiate feel to it that makes all the businesses there seem like wonderful amenities.
We got into the barracks, walked upstairs, and went into the studio. It's charming. You really can't tell this used to be a barracks at all--each studio has light pouring in from multiple windows, and even the hallways between the studios that line the outer walls have windows and big glass doors. It feels like quite an airy space, and you can look into the studios and watch the artists at work. The lower floor is for studio/retail space, and they have to be open to the public during the day as well as have a retail component. It's an incredibly intriguing location!!
I got to meet Alan Ziter, the Executive Director of the NTC Foundation, who gave me and Robin and her husband and my partner a quick rundown of the facilities and showed us the last available studio on the second floor. 324 square feet, with wonderful windows on the east side, and a big glass door on the west. Flooring had been put in so the it wasn't concrete, and all the walls were painted a clean white. Electricity wasn't included (which he said would run about $250 a month), and it didn't appear to have water which could be a real problem when you're dealing with fabrics and dye and such... But we'll see. [Edit: Alan Ziter emailed me and mentioned that the utilities and common area fees are actually 25¢ per square foot... Quite a difference from $250 a month! Much much more affordable...)
It was intriguing as a studio space, and I will be talking to my friends about it as we have lunch on Tuesday. Yeah, my "long story that I wasn't gonna go into" that I mentioned in a previous blog post involves two of my friends and I going in on a studio space together. So we're looking.
But regardless, the Bravo School of Art is on it's way, and their course offering are quite eclectic. Robin had hoped I might figure out a class that I could teach, but my first instinct was to teach sewing, and the classroom/studio isn't equipped to accommodate that... So there are other things I could teach that are outside of the box (for example, one of Robin's classes is called "Poetry Box", which has nothing to do with scene design but uses the skills she incorporates in her scenic design process and applies them to other ends), but I think I need to ponder that a bit more. I think I've got my hands full making a stock of clothing just yet, but sometime in the future, Watch Out!!! : )
Okay, this is a book!
Live life with relish!