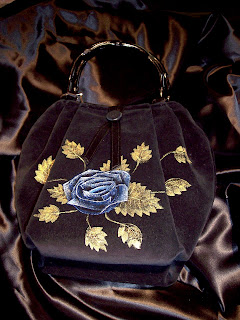 Good grief! Never make this purse out of thick cotton velour! Argh!!! My fingers will never forgive me, and my poor poor sewing machine... I swear I was sewing through so many layers my machine probably felt like it was hammering through metal...

I think I may pursue a different kind of approach when making these handbags in the future. I learned a LOT from constructing this. First, I learned that the first one will always take longer than the rest. Haha! I made so many mistakes, and then had to backtrack over and over, that I feel like I have a perception of the purse-building process that will come in handy in the future! Second, make sure that you know how the purse is going to close before you even start. The closures have to be inserted early early early in the process. Third, never make just one.

I guess that goes for everything--if you're gonna make one, go ahead and make two or three at the same time, just to get the "process" down in your head. There's a lot that can be learned not only from the construction of things, but the process in which one constructs multiples together. I see that making more than one of these purses at the same time is actually a more economic way of spending time.

But it's done. And today, I make one for the first coat I made... The one with yellow roses.

Until next time--Live life with Relish!